No, no one has been bored to death, however, BBC’s Stormont Live reported on air that a man walked into Stormont with a bag (have you heard this one?), and as such the alarms were rung. Right in the middle of David Ford’s speech, too. A suspended assembly indeed. More to come later. 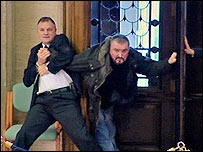 UPDATE: BBC 24 is now reporting a man walked into the foyer claiming to have an incendiary device. It is being suggested he is a loyalist (?). Screams and shouts were heard. ‘A bit of a kerfuffle at the top of the steps’. No evidence that the man actually had any device on him as yet.

UPDATE 2: Michael Stone is being named as the loyalist who walked in with a bomb.

Apparently he took the time to spraypaint ‘SINN FEIN IRA WAR’ on the pillars of Stormont before he got caught in the revolving door.

UPDATE 3: The police are getting out their crime scene tape. Stormont is now a crime scene.

Trying very hard not to laugh.

UPDATE 4: BBC 24 is showing tape of the event, it was indeed Michael Stone. Sky News is showing Stone, laying flat on the ground being handcuffed with his legs in the air at the moment. They seem to have the clip on a loop, lol (I shouldn’t be laughing, should I?). It is either on a loop or he is incredibly difficult to pin down. LOL. This is certainly more exciting than the speeches were.

UPDATE 5: Sky is saying he chucked a rucksack at the security in the foyer. In case you are worried about the MLAs, they are all currently getting soaked by pouring rain as they huddle around the news vans outside.

You couldn’t make this up. In fact, Reg Empey has just said, ‘Nobody could have written the script for this.’ There you go, Slugger has its finger on the pulse.

UPDATE 6: More seriously, Sky is now reporting that Stone had a live device, or at least that is what security believed, now they are saying they can’t confirm whether it was a live device or not. Sounds like security was taking precautions as is their job.

UPDATE 7: People are milling about outside Stormont, the rain seems to have slackened a bit but it is still wet and damp. The bomb squad seems to have arrived. Eyewitness report from a Reuters photographer (as reported to Sky) says Stone pushed his way into the doors, threw the bag at security shouting it was a bomb, smoke and sparks were emanating from the bag. Rumours are flying about guns and knives and people getting hurt but that does not appear to be the case from the video being shown and from commentary from people who were in the reception area when Stone sort of burst in. If you see the clip he doesn’t seem to quite make it all the way into reception, his arms are held stretched, pinning him with his back to the doors.

Well, it appears now the soundbites are rolling in, and we can pretty much write those ourselves. ‘A stark reminder of the dark days of the troubles and exactly what we are trying to avoid,’ ‘The reality is this, that the stalemate has created a vaccuum that allows for this sort of thing to happen,’ ‘The security arrangements will have to be reviewed, questions need asked…’ you know the drill. As you have a load of reporters standing around with a load of politicians who have nothing to do but mill about, I am sure we will be treated to all sorts of twaddle, until they can resume business. If anything more exciting than that happens, I’ll blog it, otherwise, this is Rusty Nail, signing off.