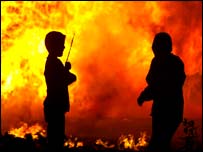 Here, as change is often incremental it is not always noticed. The BBC examines the changes to the bonfire tradition. Overall the number of bonfires are down, more sites are properly managed and the number of paramilitary displays has been declining. The one which attracted the most attention last year, Pitt Park (East Belfast), this year will have no paramilitary display and will be reduced in its scale. Paul Hoey of the Crown Project points out:

“We’ve come a long way over the last 10 or 15 years. There was a bonfire on every street corner, now we’re down to a small number of bonfires that are organised and, I have to say, pretty well organised.”

In Larne they have a early planning process:

“…we’ve been meeting for several years now all the bonfire organisers plus statutory agencies from very early on to talk about issues.”

In Donaghcloney the bonfire is so small now it is largely symbolic with an Ulster-Scots festival ran instead. One County Antrim village is considering introducing a beacon. Although an Ulster version of this Spanish event still appeals to me.

On the issue of paramilitary flags and it is also worth noting that independent surveys about the display of loyalist paramilitary flags have shown a consistent drop in the number put up. In East Antrim, a flags and emblems protocol has been developed. It aims to have flags:
1. To negotiate the limited display of UVF and YCV 1912 flags solely during the period of school holidays.
2. Find fixed sites (away from mainroutes and junctions) for the Union flag to be displayed throughout the marching season and UVF and YCV 1912 flags to commemorate the Somme and Ulster Day (28th September) rather than lamp-posts.
3. Flags put up for a parade to be up for a maximum of seven days.
4. Organise the removal of tattered flags.

With murals it aims to negotiate the “permanent removal of murals depicting armed men from the present conflict, excluding memorial murals, with a view to erecting cultural murals in their place.”

In the Village area of Belfast in the past six weeks 3 UVF murals have been replaced by one historical and two sporting murals.