Well, The View was interesting last night. It turned upon a live outside broadcast from the inauguration of the new DUP, and it did the new DUP leader no favours since it not only documented his win, but his failure to maintain a coalition. 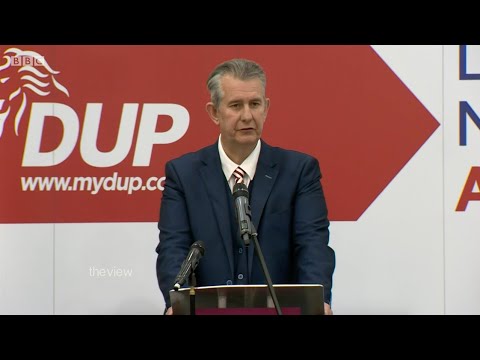 One fascinating if minor detail probably illustrates that failure best is from this BBC report on the changeover, when it noted that Arlene Foster:

…has already changed her Twitter handle from @DUPLeader to @ArleneFosterUK, taking all 96,000 followers with her. The twitter handle @DUPLeader was quickly taken by someone else on the social media platform and is now being used as a parody account.

Clever, if a little churlish (pointless even) if as previously reported she plans to leave the DUP and politics in general. Nevertheless it confirmed what a few folks have been saying to Slugger all week: the rift is bad for Poots.

Ian Paisley came out to the cameras to say how he knew how it felt to have a leader deposed in the prime of his office:

"It killed my father," Ian Paisley says he knows exactly how brutal the changing of leadership within the DUP can be… pic.twitter.com/Rq7zT5Lc7f

However, there are some clear differences between the coup Robinson engineered against his dad, and the one he supported against Arlene Foster. For one, there was no ongoing and overwhelming crisis at the time.

And secondly, Robinson involved the younger Paisley and others in negotiations over how the then DUP leader and First Minister would depart office. No such courtesy was extended to Mrs Foster.

Thirdly, Robinson was frustrated that the Chuckle Brothers routine was not only unpopular with the DUP’s base at the time, but that it covered up profound inaction in the OFMdFM (as it was called). He wanted delivery, not PR.

As Paul Bell, a representative of the DUP’s Fermanagh and South Tyrone Association note, we have as yet not seen any substantial shift in the new leader’s approach, which gives the whole thing a distinctly personal rather than political flavour.

Talking to an old friend who runs the The Dissenter he pointed out there are certain commonalities here between both the DUP and Sinn Féin’s recent handling of changeovers in the Derry based party, which has seen ten co-options since 2000.

In both cases, each party, he argues have become “introverted to their own purposes” rather than to those of the electorate. It’s confirmation, if such were needed, that both are heavily invested in the politics of personality.

Sinn Féin’s has kept (almost) everything hidden in its closet of many secrets. And that’s how the DUP has played it before now, but they will need more than Sammy Wilson’s demeanour wilful insouciance to get through this one.

The traditional form of defence from the DUP has been to attack… and this looks like no exception:

The new leader of the DUP has said relationships with the Irish Government are 'really, really bad' and claimed it would 'starve' the people of Northern Ireland of medicines and the food on their table.