At the weekend, the Sunday Times reprinted an article from the academic journal The British Journalism Review by Roy Greenslade. His rather folksy confession to a once closeted Irish Republicanism, precipitated a mini avalanche of outrage.

First I heard of it was on Sunday afternoon when a Liverpool mate sent me a droll response to this ‘revelation’ by text. It wasn’t news, as it’s been in the public domain since Nick Davies revealed the matter in Flat Earth News in 2009.

The piece flows well but feels oddly out of time. Not so much because it touches on his secret life writing as George King in An Phoblacht during the troubles, but for what it doesn’t say about journalism, and the pressing challenges of now.

There’s little in the conservatively written piece to lift it out of mild personal biography, to draw upon his ex-professorship and tilt towards one of the biggest issues of recent years, which is how do we get politicians to tell the truth?

Which brings me to the Republic’s government Commission on the Future of Media, an excellent consultation exercise on how we deal with the ongoing market failure of elite journalism which draws on contributions internally and externally.

Their thematic dialogue series is eye catching, especially number three. It’s filled with the sort of insight you might expect from a former professor of journalism, with sharp contributions from Claire Wardle, Shona Murray and Catherine Fieschi.

As Emily Bell (late of the Guardian, now the Columbia School of Journalism) notes, ‘misinformation is cheap’, but the question of what journalism needs to do about it, was probably most ably answered by the FT’s Simon Kuper: 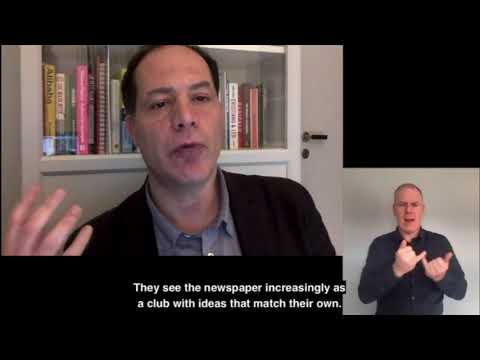 In essence, he recommends that a new journalistic approach should “not so much speak truth to power as to force power to speak truth to us…” In getting to that point, he observes a failure in what was formerly elite journalism’s core strength:

When Trump, Brexit and populism came along we initially mishandled them, especially Trump when he announced his candidacy in 2015 by talking about Mexican rapists. We journalists were caught unawares.

We didn’t know how to handle a politician who just made unsubstantiated claims or lies all the time historically. Politicians in democratic countries have used convoluted weasley language to muddy the truth, they didn’t lie outright.

Think of Bill Clinton saying during the Lewinsky affair, “it depends upon what the meaning of “is” is?  So with Trump we initially just repeated his claims we said, “well the candidate is saying that there are mexican rapists coming in”.

We should have said that the evidence there is suggests that undocumented immigrants commit crimes at a lower rate than native born Americans. And then just stop repeating the lies.

“Letting lies pass was lazy journalism” he says, particularly as the press retains “privileged access over accuracy”.  It has encouraged politicians (still reliant upon them for orientation) to plunge after them into endlessly befuddling rabbit holes.

The cognitive overload [h/t Phil] which follows means that bit by bit we are losing track of what makes sense in the world and what’s lost alongside it is our think sociably and agree on actions that are in the broad public interest.

The shift online has changed the relationship that publications now have with its readers, particularly in regard to a highly inquisitive commercial deal in which the once sacrosanct editorial copy itself is traded for valuable eyeballs:

We now have this dangerous piece of knowledge that we didn’t have in the print era. We know exactly what readers read even how far down an article they read.

We have found out they like stories that deal with identity that in some ways give them an identity. So articles about Trump, Brexit, Black Lives Matter, whether you approve or oppose those things, help clarify your identity.  So people read them.

An article about the nuances of Joe Biden’s climate policy it doesn’t have that identity appeal so it will be less well-read. And so elite media fixated on trump for years and he drove the news agenda.

And once the media are in a position of debating whether a falsehood is true, truth has already lost because “post-live” fact-checking rarely has the impact of the original lie.

This leads to a situation where “what’s popular” trumps “what’s true”. And the polarisation that follows invokes some intolerance of the reporting of ‘non liberal’ matters within liberalised readerships of the NYT, The Economist and the FT.

But there’s been a change since November, in the US at least:

Happily I think we’ve learned during this era how to cover lies. It’s taken too long, but since the election in the US the media has stopped repeating Trump’s lies about election fraud. They don’t specify his claims in detail and take them seriously.

They just say the President repeated his baseless claims.

What’s happening too late is that newspapers are adopting a kind of legal, scientific model of truth. You can’t walk into a law court and just make unsubstantiated claims without any evidence. You can’t do that in a scientific journal either.

I think newspapers are starting to function that way too. You cannot come into our pages and make claims without any evidence that vaccines don’t work or climate change doesn’t exist. We no longer print that kind of stuff.

One of the great affordances of the Trump era was for the rest of us to indulge ourselves in the illusion this was a US disease (which of course it is). But as Kuper has noted that what’s popular has been more likely to take in European papers too.

Political lying, according to one of Ireland’s most revered broadcasters, has been an established part of Ireland’s own media landscape for years, with journalists unable to figure out how to work around it.

The solution, Kuper suggest, is to reduce reliance on “politicians giving their spin” and more on hearing from the likes of lorry drivers, trade negotiators, and exporters. In other words, we need more analysis, and less opinion or spin.

In cutting down reliance on the he said/she said (or worse) stenographising of politicians, journalists can incentivise politicians to tell the actual truth and thus enhance trust and reputation and underline the legitimacy of both professions.