“But the stars that marked our starting fall away.
We must go deeper into greater pain,
for it is not permitted that we stay.”

So much commentary on Northern Ireland’s more than two year stassis misses the point that what it represents is a real collapse in political will and imagination. Yesterday I gave my own thoughts to SkyNews on where I think that takes us. 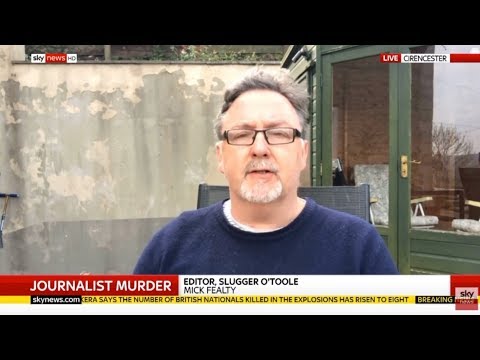 What’s both astonishing and shocking is how a community like Creggan which has had plenty of senior representatives at the very highest levels at Stormont can still be struggling under the cosh of paramilitarism.

One of the most disturbing aspects of the CCTV footage was the casual way bystanders stepped back and allowed an apparently young gunman (and his young wing men) turn around the corner and fire directly upon their friends and neighbours.

Little were they to know who would pay the price with her life for their insouciant tolerance, but then again this is a community for whom paramilitarism and anti state rioting has been a culture and a way of life for generations now.

Writing in the Sunday Independent, Eoghan Harris coins a phrase which could be used more widely to describe what’s been happening in marginalised communities like Creggan for generations now: the Recurring IRA:

We are shedding crocodile tears unless we take three steps to remedy our complicity in the historical chain of events that culminated in the murder of Lyra McKee.

The first step is to face the fact that the Provisional IRA was the prime mover in the Northern Troubles, not the British army or the RUC.

The Provisional IRA killed half of all those killed in the Troubles (49pc) as compared with the British army security forces (11pc).

The Provisional IRA pumped sectarian poison into the body politic by murdering 790 Protestant civilians, sometimes as they held their children’s hands.

The Provisional IRA’s campaign created the cruel climate for the Recurring IRA, one of whose branches murdered Lyra McKee.

And it’s not just Harris. Eamonn McCann in Hotpress writes:

…they don’t reckon they need a mandate to wage a war for Irish freedom. After all, none of their predecessor IRAs felt need of a mandate, and they now appear to have been granted a general absolution.

They are presented on the walls of the streets we walk on the way to work or to school, if not explicitly for emulation, certainly for admiration. Their likenesses are there to be looked up to.

The months are measured out by commemoration meetings and parades, prayer gatherings for the repose of the souls of those who willingly made the ultimate sacrifice, or, like Lyra, were sacrificed by others on the altar of freedom.

Even the method is drawn from the dark past. Seamus McKinney writing in the Irish News on Saturday notes:

It was widely used by the IRA in the 1970s, so much so that security forces knew that if a riot eased, they should brace themselves for live gunfire. So common was the tactic that news journalists knew not to stand close to police or security forces in riot situations in case they were hit – as Lyra McKee was – by the incoming fire.

Most revealing is Denis Bradley in the Irish Times, who shared this anecdote from when he’d been a victim of anti Agreement Republicans, when Martin McGuinness came around to sympathise and explain that Dennis was attacked to get at him (McGuinness):

…unless dissident republicanism supplanted him and his ilk with military competence coupled with enough community support, they were destined to be no more than a nuisance who would consistently fracture and become a subplot in the efforts to bring about a new and united Ireland.

What this reveals is that the Peace Process has been less about peace building and more a Cold War by stealth, which extends from the bleak, sterile relations with the DUP to the marginalisation of up-against-it Republican communities like Creggan.

As I have been at pains to highlight all weekend, this is not something that only affects Republican communities. Ian Ogle’s death had a fraction of the emotional impact of Lyra’s murder but it was no less disturbing 21 years after the GFA and 25 years after the Ceasefires.

Dawn Purvis noted on Talkback today the UVF still has no intention of leaving the scene. We are all hemmed in by an ungrounded narrative – riddled with demagogic simplifications of the conflict that continues to confound any effort to usefully define a common purpose for all the people of NI.

In the Irish News, it falls to Tom Kelly to point out the painful truth which is that for too long, “the leaders of the Alliance, SDLP, UUP and Greens have been coasting on the coat-tails of the the DUP and Sinn Féin”. Ditto some opinion formers who bought in early into a narrative of inevitable failure and cannot being themselves to abandon their sunk investment.

Beyond the pain of the present human tragedy the people of Creggan and inner East Belfast have both been failed by the sheer poverty of a politics which over indulges differences and misses the need to work the Agreement and the new start a previous generation gifted us.

There is little sign that Sinn Féin’s Northern Ireland MEP understands the need for genuine introspection on how the opportunities of that Agreement have been squandered. But Derry is suffering from a wider failure of politics which makes its youth such easy pickings for fanatics.

The bitterest pill to swallow is the likelihood that Lyra was murdered by a “ceasefire baby” like herself never intended to face such perils. That’s two young lives destroyed because we (not just the dissidents) ignore the transformative potential of the Belfast Agreement.

Derry has had two out of all three Deputy First Ministers: Mark Durkan and Martin McGuinness. Yet twenty one years on we are in Groundhog Day mode. Northern Ireland’s needs not just to be saved it needs a #NewDeal based on that Agreement that expands the options for all its young.

Dante also wrote “do not be afraid; our fate cannot be taken from us; it is a gift.” Almost unconsciously we have dragged the morose fatalism of our conflict behind us and into the peace. It disrupts all genuine efforts to break into a wider future, but it does not mean it is our long term fate.

That is for the rest of us to imagine, work towards and (through our failures and successes) eventually meet. But only if we have the courage to take up the pain of a ceasefire generation my own has already failed to meet the challenges facing our youngest and most marginalised.