Brian’s point that finding an effective political response to the murder of Lyra McKee won’t be easy is well made. And yet given the organisation responsible for the murder of an Irish citizen marched in Dublin today, Sara Canning’s insistence that this must not stand resonates deeply.

Lyra’s citizenship is a direct product of the Belfast Agreement. It was copper-fastened and given legitimacy by a referendum which was passed by more than 71% of the population of Northern Ireland and a staggering 94.39% in the Republic.

As it happens, most of the members of the PSNI, regardless of their religion or political preferences are also Irish citizens under the laws of the Irish Republic and actively recognised by the laws of the United Kingdom.

This is the sound de jure basis that Martin McGuinness’ had for calling the would be murderers of Irish policemen of the PSNI, traitors to Ireland.

And yet, Brian is right. There is no deal that can be done between the DUP and Sinn Fein that can make this situation go away. Rioting in Republican areas of Derry has been a regular feature of commemorations of the Easter Rising for generations.

As I noted on BBC Breakfast this morning, this is a story of their failure to deal honestly and directly with the aftereffects of their earlier lives as political supports to the most  visceral elements in our conflict: 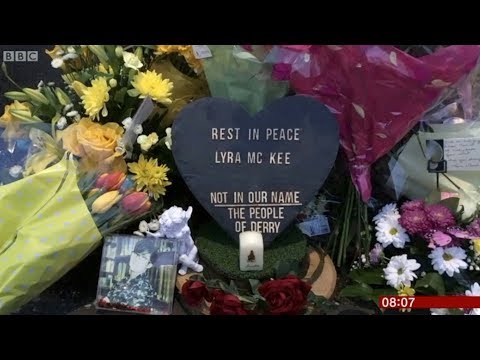 And as I noted in another interview on BBC Radio Five Live just beforehand there is a single problem with two very different cultures of Paramilitarism in Northern Ireland: Republican, splintered and constantly regenerating, and Loyalism which has continued almost undisturbed.

Each engenders a deep lack of empathy in the communities they continue to control through the administration of a callous and degraded form of justice in which punishments and death are handed out every bit as arbitrarily as Lyra was given that fatal blow on Thursday night.

The deep flaw in the so called Peace Process was rightly named by Barney Rowan in Holywood the very same night that Lyra died:

“We as ‘the conflict generation’ are shovelling our experience on the people who come behind us. So I hear young people … talking about things they could only have heard from us. And we need to think about the damage we’re doing in all of that.”

Fine words are not enough, when the real underlying message which comes with every commemoration of the Easter Rising comes with that poisonous old lie: dulce et decorum est, pro patria mori.

DUP Conference 2022: Where unionism is and where it might go…

Amid the noise, a reminder of the power of grace…

A Tale of two Budgets…

Why Unionism cannot afford to divert attention from its own failings any longer.