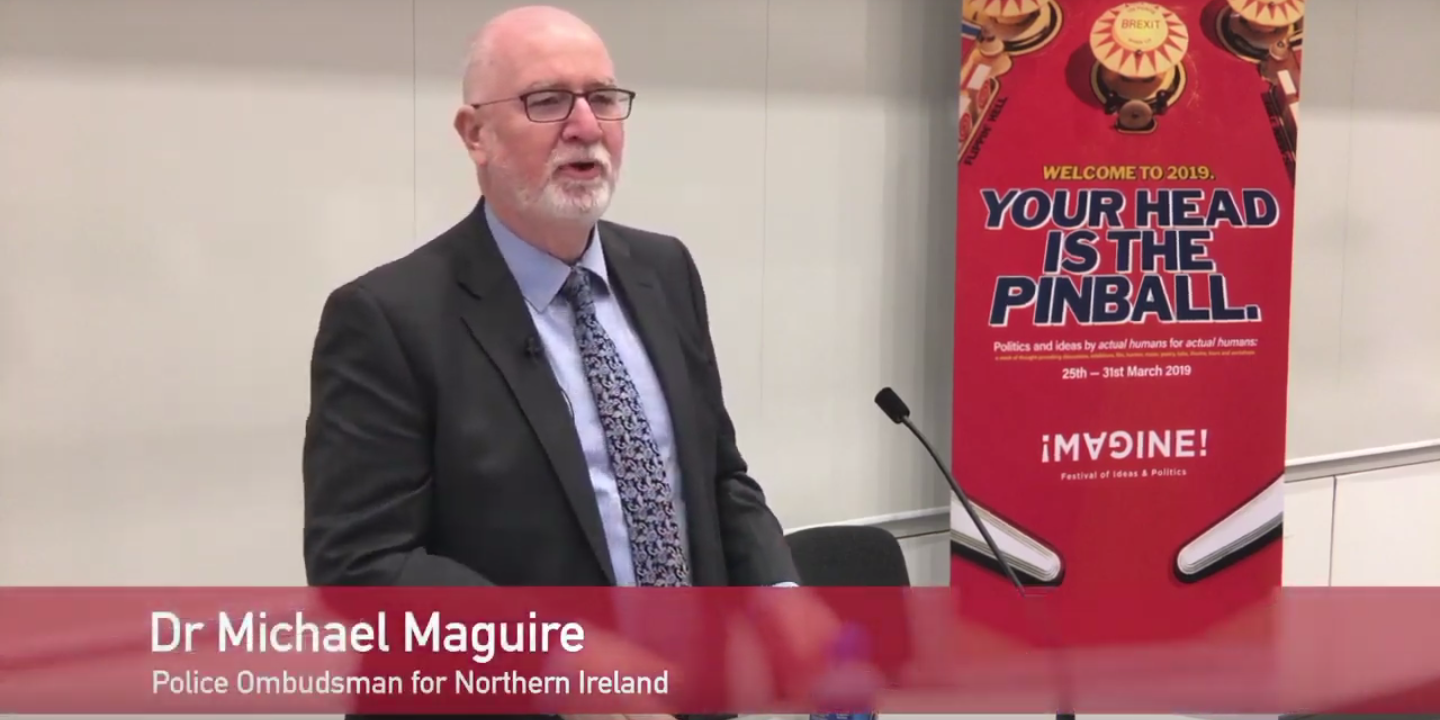 Dr Michael Maguire delivered a public lecture last night on What Does Independence Mean? as part of Imagine! Belfast festival of ideas and politics.

The Police Ombudsman for Northern Ireland (PONI) completes his seven year term in July this year, and he expects this to be the last such statement that he will make. 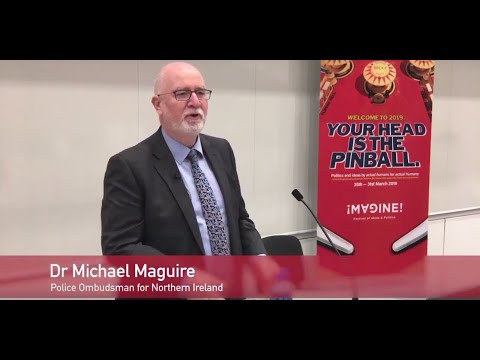 “At one level discussion of the topic is pretty straightforward: it means ‘free from outside control or not subject to another’s authority.’

“Thus investigations are independent and free from political interference, prosecutorial decisions are taken on the basis of the evidence and judgements are handed down without fear or favour. These are things we take for granted.

“Yet it is an area of constant debate – perception and reality merging together to form often competing narratives about organisations and how they perform. It is often the first line of attack for someone who doesn’t like the conclusion of our work – I do not believe an independent decision was taken.”

He repeated his overall conclusion several times throughout the 25 minute speech:

“independence is a fragile thing, hard won and easily lost. It requires constant protection as it can be under threat from some subtle and not so subtle attacks. You take it for granted at your peril.”

The independence of PONI is recognised globally.

“Taking ‘civilian police oversight’ as the gold standard for handling complaints against the police [Professor Prenzler] states ‘scholars have accepted that (PONI) fits the civilian control model and is possibly the only oversight agency on the world that ticks enough boxes to be categorised in that way.’

“Overall control of the police complaints process, the ability to make recommendations, publish reports, access information are all underpinned by legislation. These are areas that others look to with envy.”

“In thinking about these issues there may well be relevance for other public sector bodies that value their independent status. I wouldn’t overstate it but as we have seen with the recent scandals (eg RHI) ‘accountability & oversight’ remains a strong area for concern.

“Maintaining an independent perspective and position is central to avoiding both the perception and practice of oversight bodies being asleep at the wheel.”

Before taking up the role in 2012, Maguire undertook an investigation into the independence of the Office in his previous position as the Chief Inspector of Criminal Justice. So he knew what he was walking into!

Maguire identified three lessons that can be learned from the Office of the Police Ombudsman.

“Firstly, financial independence. It is often said he who pays the piper calls the tune. How can you truly say you are independent when the purse strings are held by someone else? … In my 11 years heading criminal justice oversight bodies I cannot think of one example where a Minister has tried to influence decision making. Any Minister with responsibility for police oversight would be extremely foolish to try and interfere with decision making and in my experience has never done so.

“My experience with civil servants has also been positive. In the vast majority of cases they have acted professionally and with a correct understanding of the relationship between the sponsor Department and the Oversight Body. Very occasionally, there have been attempts which have overstepped the mark.

“As an aside, I do remember under Direct Rule wanting to brief the then Minister, without his civil servants present, about a sensitive topic on prisons. It was by pure ‘coincidence’ that a senior civil servant in the sponsor department initiated a conversation about the fact my contract was coming to an end and their need to consider a possible extension. I went ahead and briefed the Minister without his civil servants present. Examples such as this have been few and far between.

“This is pretty mild and easily batted away. I do wonder if this has been an issue for other oversight bodies that produce a report which might embarrass a Minister of the Department. Anecdotes I have heard would suggest not, but that’s for them to consider how they handle such inappropriate contact.”

Maguire was realistic, noting that “funding is a political decision” made in an atmosphere of competing priorities.

“My legacy investigations are a case in point. In 2012 when I was appointed I had approximately 170 legacy complaints and around 40 staff. Today I have over 430 complaints – the vast majority involving allegations of serious police misconduct or criminality – and less than 30 staff.

“Let me be very clear. I am not saying that there has been some form of conspiracy to underfund the Office to undermine its ability to investigate the past, although there are some who would argue this is the case. The budget cuts facing the Office have been part of a general austerity drive across the public sector and in certain areas we have suffered less than others.

“But is it a – perhaps unintended consequence – of the failure to fund legacy work that has forced the Office to prioritise which legacy cases it can work on. Thus independence of decision making can be compromised because we don’t have control of our budget.”

His second lesson used the common illustration of boiling the frog.

“This rather gruesome image is often presented as demonstrating the dangers of slow incremental change – by the time you realise it is a dramatic change it is too late to do anything about it. This is an area that any oversight body has to be constantly aware of.

“Such challenges are often presented in the language of managerialism. The need for greater efficiencies mean that accommodation has to be shared, capital budgets have to be controlled, HR practices have to be centralized. We are constantly being asked to ensure our policies and procedures are consistent with the NI Civil Service and to participate in central initiatives.”

But he warned that as an investigative body, PONI has “its own unique culture and ethos – based around the principals of civilian police oversight … that distinctiveness and clarity of purpose and capacity for flexibility in operational decision making has made a significant contribution to the building of a successful office.”

He also warned that “the police oversight organisation that exists in 5 -10 years may be very different”, not due to “direct challenge” but instead “the back door of managerialism, budgetary constraints and public sector efficiency.

“Finance does determine when cases can be investigated and how long an investigation can take. Recruitment procedures do determine the nature and type of organisation. Accommodation does influence the character and ethos of the organisation.”

His final lesson was about “independence of judgement” or “independent decision-making”. It’s the area where PONI “have most control” yet “it is also, perversely, the area of greatest challenge”.

Magure admitted that during his tenure at PONI “at times it felt like we were under attack.”

“Whether it was from a lack of funding, judicial reviews, and elements of a hostile media set against everything we do. This ability to cherry pick reports – focus on the ones you disagree with while ignoring the ones you like has taken on an art form.

“Thus we are accused of being obsessed with the term ‘collusion’. Those who say this obviously have not taken the time to look at the work we do. Of the 14 legacy reports we have published we have found no evidence of collusion in 11 of them. Hardly an obsession.

“We are accused of grandstanding and hogging the headlines, of a witch hunt against police officers focusing on what has gone wrong. That we don’t understand policing. Again I would say that the evidence does not stack up. We find an outcome in favour of a complainant in around 30% of cases – put another way we say there was nothing to substantiate a complaint in 70% of cases. We publish around 50 case studies a year. If you are bothered to read them you will see that there is a real balance of both criticising the police and showing they did no wrong. Hardly a witch hunt.

“… you cannot take independence for granted. It can be undermined in a number of different ways. Whoever holds the post of police ombudsman must keep this in mind. Be aware some entirely innocent initiatives can have unintended consequences.

“Secondly, it’s not enough to be aware. You have to take action. You need to be a thorn in the side of those you are holding to account and who have the power to influence what you do. This should not be destructive but protect the office and what it does. Society in general and policing in particular will benefit from strong evidence-based opinions freely given.

“Finally, and most importantly independence of judgement is the key. Independent mind set and perspective are essential. Independence is about coming to an evidence-based view. That’s why we are seldom away from the headlines. The Northern Ireland population are not fools. If you want people to accept you are independent then you have to provide them with the evidence to let them make up their mind.”