So I was on Nolan again this morning, firstly to “celebrate” Arlene Foster’s winning politician of the year award from Asian Voice [Titter ye not at the back! – Ed]. Later we got to brass tacks on the Irish Times ‘mini poll’ of Northern Ireland.

Buried in the data between Michelle O’Neill coming rock bottom amongst Northern Ireland’s political leaders (argue amongst yourselves) and Naomi Long (rightly, in IHMO) top and general disquiet at the prospect of a hard Brexit is this little gem: 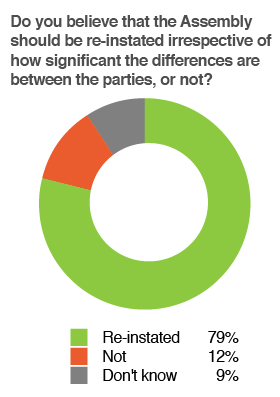 Now, in the programme I did get the figure wrong. But for the last couple years of Stormont being down we have heard politicians and commentators bore on about how the public doesn’t want it back.

Turns out that is just self serving bunk from the work shy or, more likely, the terminally risk averse. It suggests that our whole political game is unfolding in a very different [Quantum? -Ed] universe to the one in which ordinary Northern Irelanders have to live.

Not only do they want their politicians back at their jobs, they don’t want to hear any more about negotiations: secret or otherwise. I’ve a hunch the plain people of Northern Ireland are not as cabbage-looking as they are often taken for.

There is some good authority from a caller right at the very end who does what we used to do through the Slugger Awards, and cuts across parties to suggest who he reckons a few of the authentic politicians we do have are.

Strong contribution too from my old mate Brendan Mulgrew who points out that there are at least two DUPs and probably more. Do get as far as Peter’s novel characterisation how the press might respond to Arlene saving a Catholic from a river.