Regular readers of Slugger will know I don’t believe in pulling punches on the fugue state that Northern Irish nationalism presently finds itself in. But there matters are not helped by a counter indulgence of the core problem.

Given Cameron’s parliamentary apology to Derry, it was either naive (or just plain ignorant) for Karen Bradley to suggest that all state killings were legal. Some, perhaps many, probably were. But this clearly does not apply to the victims of Bloody Sunday.

As Secretary of State, Ms Bradley ought to know that Northern Ireland’s past has become a quagmire. Since 2007 the process of dealing with the vexed legacy of the troubles is being handled in a series of secret negotiations by our two most extreme parties.

Former Guardian editor Peter Preston once described this set up as “a nightmare coalition of twisted motives”. He wasn’t wrong. And after ten plus years of this regime, it seems we are only too willing to believe we have nothing in common with each other:

As we know the only official branch of the state which is properly resourced to look at unsolved crimes of the Troubles era (ie, the Police Ombudsman’s Office is looking exclusively at historic injustices by state forces.

Whilst this is an explicit admission by the state that there are at least some cases to answer, it also obscures the fact that 90% percent of all killings were by republican and loyalist paramilitaries. It’s not a case of it being one or the other, both are the case.

Every political actor in this legacy drama is caught in an uncontrolled political quagmire, which threatens to consume all our futures. As Micheál Martin has highlighted, there is an anti GFA form of politics which is “undermining a fundamental pillar of the peace process”.

Ms Bradley must know that any amnesty would have to include those thousands yet to be convicted for past terrorist crimes. And it could not be done without also delivering some form of justice to relatives without breaching Article 2 of the ECHR.

Northern Ireland does not need its only elected politician (albeit she is the right honorable member for Staffordshire Moorlands) with any active responsibility to drive the car straight into that same “nightmare of twisted motives”.

My extended thoughts in conversation with Dermot Murnaghan last night on Sky News: 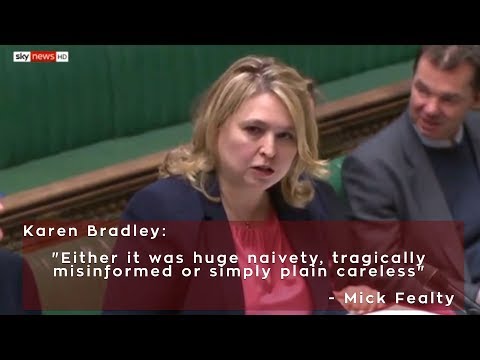