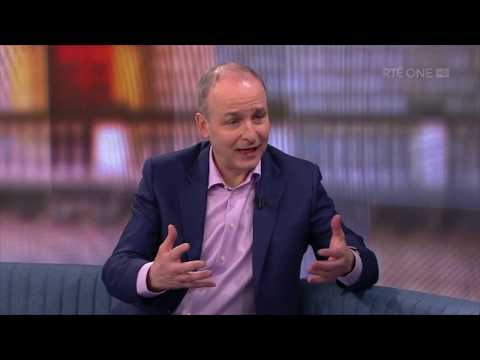 I see Colum Eastwood is taking some stick for having the temerity to engage in muscular politics with his party’s long term rivals Sinn Féin in his speech yesterday. Tomorrow I hope to have a piece in the Irish News explaining why I think the focus on policy matters.

But if you haven’t seen it, this exchange is a masterclass from the Fianna Fáil leader in how attacking your opponents their shortcomings is the essential grist to any successful political mill. Particularly in this section which focuses directly upon Northern Irish politics:

Áine Lawlor:  “You have a partnership now with the SDLP in Northern Ireland. You say you believe the voters will choose that middle ground that you think is there and is not being represented in the North. In terms of your attacks on Sinn Fein though over the fact that Stormont is no longer in existence, how fair are you really being because you focus ALL (she emphasises “all”) the blame on Sinn Fein in your contributions. It was ARLENE (emphasis) that couldn’t deliver her party to the deal that she agreed with Sinn Fein. It was ARLENE (emphasis) that walked away from the last best chance to restore Stormont.”

Micheál Martin: “It was Sinn Fein who collapsed it in the beginning over the Renewable Heat Initiative. That is an incontrovertible fact. It was a reckless and irresponsible move. When you have scandals in government you deal with the scandal. You have your inquiry and it falls where it falls. You don’t collapse the entire edifice of government and parliament – name a parliament in Europe that got collapsed because of a scandal in a particular government department? It’s more of – and I’ve criticized the DUP as well in terms of its behaviour because I think the DUP and Sinn Fein ran the Northern Executive like a cartel.”

Áine Lawlor: “But many believe that the DUP is now more interested in the power they are able to exert at Westminster than what’s happening.”

Micheál Martin: “I actually don’t believe that. I think there is a strong element within the DUP that wants devolution. I look at Jeffrey Donaldson’s comments recently on Brexit which I thought were showing a hand of conciliation and a genuine attempt to say that we’ve got to mend fences here. And I think Arlene Foster herself would much prefer the Executive to be back up and running. That’s my sense.”

Áine Lawlor: “Well, they’re not able to deliver the whole party on that.”

Micheál Martin: “My fundamental criticism of Sinn Fein has been. I was there negotiating the devolution of justice. I was there. I know how they operate. I know how they can put things together when they want to and how cynically they can pull things down when they want to. And I was just so disillusioned that they can be so cavalier with the institutions of the Good Friday Agreement and I think underlying a lot of Sinn Fein’s approach is that there is a half-heartedness to the Good Friday Agreement within Sinn Fein. Hence, Brexit and the immediate push for a border poll and let’s have it now. And I think they haven’t worked the institutions strongly enough.”

Áine Lawlor:  “And where’s the republican leader in you when you focus all your criticism on them predominantly and not on the DUP?”

Micheál Martin: (In disbelief) “Are you suggesting that Sinn Fein is somehow the embodiment of republicanism? I mean to me Sinn Fein is the embodiment, the personification of sectarianism for far too long. My republicanism is the Wolfe Tone republicanism of uniting Catholic, Protestant and Dissenter. I’d add others now because we have a much more diverse society in the North and elsewhere. The Good Friday Agreement represented a triumph of democratic constitutional republicanism.”

Far from being dissuaded from attacking opponents within his own tribe, northern nationalism is long overdue a big fat row over what it means to be a nationalist and/or a Republican from the point of view of joining common cause with others to make Northern Ireland work.

Not least because as we have seen from the last twenty years of the Peace Process, any damned fool can screw it up.