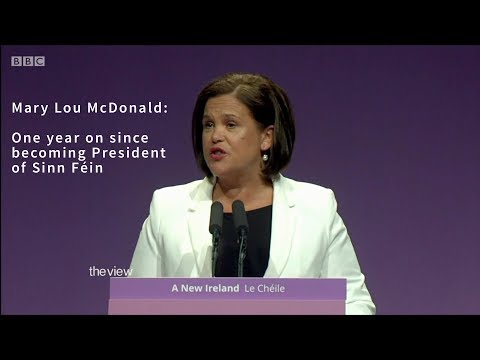 Good piece from Gareth Gordon on where Sinn Féin sits a year after Mary Lou brought her own shoes to the role that Gerry Adams defined. One of the affordances of the border [#Partitionist! – Ed], is the ability to say one thing in Northern Ireland and another in the south.

But Gordon deftly removes that diaphanous screen to allow the political facts of the last year to speak for themselves. One, Sinn Féin rather than taking power in Northern Ireland has relinquished it to Unionism in the form of the DUP.

And two, it now finds itself in a situation where both the Taoiseach and the opposition leader are happy to dine out on a shared perception that Sinn Fein is a group populist poets who come with a meagre aptitude or temperament for the hard business of government.

What gives the Taoiseach’s words some heft is not to be found in the party’s own scroll of official press releases, but that it chimes with freelance supporters out in the wilds of Twitter and even here in the more civilized parts of Slugger’s comment zones.

Few SF friendly voices these days believe Stormont is not dead, and salvation lies in a border poll which depends on the old enemy (ie, the Brits) giving them a shot for freedom for free [Ha! – Ed]. Seizing power in Ireland will never be as easy as Danny Morrison once made it sound.

Fine Gael (whose members loathe and detest Sinn Féin with a passion equivalent to the average Northern Irish Orangeman) and Fianna Fáil (whose leader has put a narrative ring of steel between Mary Lou and his own party sympathisers), now need to squeeze Mary Lou. Hard.

Martin, despite the spoiling strategies of both his own party rebels and Fine Gael, has bought himself most of another year.

This is where Sinn Féin’s refusal to take its Westminster seats, to blow crucial political bridges and to generally make a shedload of trouble for the Brexiteers at the heart of their parliamentary lair may be held against them.