At a launch event for the book, The Ulster Unionist Party: Country before Party?, there was a roundtable discussion with three speakers who all have or had involvement with the party — Mike Nesbitt (UUP Leader, 2012-17), Lauren Kerr (UUP Press & Policy Officer), and Alex Kane (former UUP Director of Communications). After their opening remarks, the audience pitched about a dozen questions on topics that ranged from unionist identity, Brexit, party electoral pacts, Catholic support, to party strategic choices and options.

Máire Braniff welcomed all and thanked the co-authors’ universities for their support though, with a smile, noted her own institution, Ulster University, was “probably the best university in Northern Ireland”. The event was held at its Belfast campus and the book is available for purchase in No Alibis bookshop on Belfast’s Botanic Avenue as well as online retailers.

The book’s authors — all present — are Thomas Hennessey, Máire Braniff, James McAuley, Jonathan Tonge, and Sophie Whiting. Hennessey outlined the book’s contents and said that they wanted to explain what they saw as the aftermath of the Belfast/Good Friday Agreement upon the UUP. 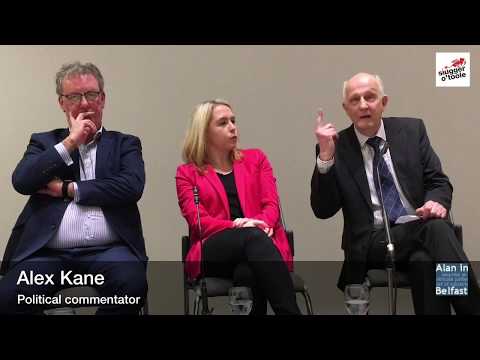 In his introductory remarks, Mike Nesbitt explained how he saw party leadership as a balance between doing what the party membership thinks should be done versus leading the party to a new position, “pushing the boat out”. He argued that he practised more of the latter.

While party leader, Nesbitt thought that the party lacked coherence and cohesion: “There were ‘sole traders’ using the Ulster Unionist brand as a flag of convenience to get elected.” He claimed an achievement of getting the party to react more as a team.

But he acknowledged that there were times when the party sent mixed messages. Nesbitt gave the example of the 2015 Westminster elections, where the UUP went head-to-head against the DUP in two constituencies but were cooperating with the same in the constituency of Fermanagh-South Tyrone.

Kerr discussed current challenges for the UUP, particularly in translating votes into seats. She gave the example of those pro-Union persons aged 18-24 who do not vote, “who do not see the UUP representing their views”. Kerr wants an Ulster Unionist Party that is “blind to religion, gender, race, and sexual orientation” and to forge “the constitutional battle” as one of “ideas not birthright”.

Alex Kane said that the UUP “still struggle to give us an answer” to what is USP (unique selling proposition) is. He did suggest that if the UUP is about country before party, then for the DUP it’s more like party leader first. Kane argued that putting country before party no longer resonates with the electorate: “60% of pro-Union voters vote for the DUP”. With a nod to political marketing, he relayed a remark from a DUP contact: “We do the Unionist brand better.”

Kane mooted why the UUP always took the risks first, whether entering all-party negotiations, agreeing Government with Sinn Fein before decommissioning, or offering a cross-communal pact with the SDLP. He suggested that the DUP learn from these exercises to do their politics better, often aping the same policies without as much voter friction.

Kane said that Northern Ireland politics is now just “a numbers game”, where the DUP will use demographic data to frame the debate. He added that the partnership announcement by Fianna Fail and the SDLP on the morning of the book launch kills off a repeat of the previous UUP-SDLP electoral cooperation offer. “It did indeed,” replied Nesbitt.

There was then a series of questions from the audience.

David McCann asked Nesbitt and Kane to comment on the former UUP-SDLP deal. Nesbitt replied that it was a success in increasing the number of votes to the UUP, but not in translating that into more elected seats. The pact “wasn’t a turnoff, but it wasn’t enough of a turn on,” as Nesbitt put it. He also noted how Arlene Foster’s campaign remark about not giving concessions to Sinn Fein — “You don’t feed the crocodile” — had stirred up a “tsunami of sectarianism” that killed the UUP’s more moderate appeal to voters. Kane added that he believed that Foster’s remark was not accidental but intentional. He also said that the UUP and SDLP only got about four months to implement their pact, whereas he thought they’d need three to four years.

In regards to galvanising a pro-Union case for the Brexit deal negotiated by British Prime Minister Theresa May, Kane said that he cannot see how the Northern Ireland parties could reach agreement on a “backstop” position. Later he added that there may have been an opportunity for a broader consensus among the Northern Ireland parties, but that passed after the 2017 Westminster elections put the DUP in a crucial position to enable a minority Conservative Government. Nesbitt explained that while others talked about how to close the border, his emphasis was on how to keep the border open, as an economic opportunity for Northern Ireland.

Michael Palmer commented that there was minority group alienation within unionism. Kerr responded that under the leadership of Robin Swann, one of his first actions was to set up a working group to examine how to improve “the appearance of obnoxiousness”. She added, “Unionism has to come to realise the risks of not opening up.”

On a point of whether the UUP was a Protestant party — “Where are the Catholic Unionists?” — Nesbitt replied that it wasn’t for the lack of his actions as party leader: “Look at all the Catholic Masses that I attended!” But he added that this will take generations to work through. Co-author Sophie Whiting, chairing the discussion, asked her collaborator Jonathan Tonge to cite their survey data results: 0.2% of Unionist Party members said that they were Catholic, versus 0.6% for the DUP. Tonge added that their survey revealed high levels of support for the party to reach out more to the Catholic population. Kane said that he didn’t believe in reaching out to any group: “Say your vision and let it be.”

Someone asked why the electorate is not convinced that the issue of the constitutional status is settled, for now, and to work more constructively with “the other side”. Nesbitt replied that he would like to see this, but that what we have is a process, not a settlement. (Kane said that what we have in Northern Ireland is “conflict stalemate” not conflict resolution.) For Nesbitt, the only time that it appeared that the two communal blocs had a productive approach to politics was the joint premiership of Ian Paisley and Martin McGuinness (“the Chuckle Brothers”): “It was great optics, but without substance.” Kane said that he now sees Northern Ireland politicians as being there for entitlement, not government.

And what about the fact that the majority of voters in Northern Ireland voted to remain in the EU? Nesbitt said that he respects the UK-wide referendum result (to leave) as the only valid result. He defended is “Remain” recommendation to the UUP during the referendum campaign, as he saw no viable “Leave” proposal. For him, this remains valid:

“‘Brexit means Brexit’ [said by Prime Minister May] is as meaningful as saying, ‘I’m going to buy you lunch.’ You don’t know if we’re going to Deanes or around the corner for a ham and egg sandwich from the petrol station. They’re both lunch,” explained Nesbitt.

Nesbitt appreciated the complexities of the multiple identities held by individuals in Northern Ireland. Quoting Seamus Heaney, “If you deny any part of my identity, you diminish me.” He said that for those in the Nationalist community, the appearance of taking away their European identity is acute.

Another asked what the UUP sustained strategy was to prise support from the DUP. Nesbitt replied that he rather focussed on soft Unionists/Nationalists as well as those who didn’t vote for anyone, such as business people. “Perhaps my efforts came too quickly,” Nesbitt reflected. He candidly explained how he had plans for a five-year mandate of a UUP-SDLP Northern Ireland Assembly shadow legislative programme, but that it fell apart after Danny Kennedy MLA (UUP) and Mark H. Durkan MLA (SDLP) walked away. Kerr said that in order to gain votes, the UUP needs to work out ingredients that appeal. Kane added that the UUP needs to ask itself why some of its voters have gone to the Alliance Party.

Do socio-economical policy positions matter in Northern Ireland politics? Neither Kane nor Nesbitt thought so. Kane gave a realpolitik explanation, where after the 2003 Northern Ireland Assembly elections, the British, Irish, and American Governments “shafted” Trimble and forged a DUP-Sinn Fein realignment as the political centre ground. Kane also repeated his point about the numbers game, citing that in the past five elections in Northern Ireland, Unionists (as declared in their election manifestos) just about, or not, represented a majority of all votes cast:

“That’s what the Arlene [Foster] is playing on, that every vote not given to the DUP … is a waste. They will continue to play this card over and over again. If you vote for anyone but us, you are jeopardising the Union, because our enemies are counting the figures as well,” said Kane.

Here, Nesbitt used the analogy of slow boiling a frog: “Unionism needs to be aware of the changing environment.” He noted that a new Unionist community are asking questions that have never been asked before. Kane underlined the difference between being not a Unionist and being pro-Union, and that this could represent 15% of the electorate.

Whether new questions and/or a 15% pro-Union swing electorate decides to get behind the historic UUP in an act of timely revitalisation is something to watch with interest.

Thomas Hennessey provided a concise summary of the book: to learn from interviews from party membership and ordinary members. He thought that how a party perceives itself is absolutely crucial. For example, he cited the relatively liberal support for abortion. The research also revealed that the UUP sees itself as non-sectarian and views the DUP as sectarian.

But listening to all of the evidence presented during the hour-long discussion, a paradox for the party and country remains. Any political party is motivated by the primacy of winning seats to exercise power. Yet most Unionist voters remain highly motivated by denying its arch nemesis, Sinn Fein, political office (even though the Belfast/Good Friday Agreement purposely facilities co-power between Unionists and Nationalists). Such voters are responsive to a Unionist majority and whichever party they deem to maintain that position — it’s a Unionist country before any party.

So what matters is the definition of “country”.

Nesbitt’s own remark that Nationalist pacts with other Nationalist parties kill off future cross-community, cross-party cooperation is not a positive harbinger of an alternative vision of a Northern Ireland government driven by ideas not birthright.

The book, The Ulster Unionist Party: Country before Party?, is available for purchase at No Alibis independent bookseller.

My interest is in efforts to address ethnonational and other identity based conflicts, appreciating the power of belief and one’s adherence to particular world views. So, while it is useful to ascertain facts, realities are influenced by traditions and customs. I seek to learn and interpret this phenomenon, by making images and storytelling — documenting events and experiences of peacebuilding in Northern Ireland and beyond. There are many stories to tell.

Co-founder and editor of Shared Future News, which reports on peacebuilding in Northern Ireland. Co-founder and director of FactCheckNI, Northern Ireland’s first fact-checking service. Co-founder and secretary of FCT Belfast, a local member of the Forum for Cities in Transition, which is an international network of local government, business, and civil society representatives assisting each other with peacemaking. I also contribute to Northern Slant and Slugger O’Toole.