On Nolan this morning I pointed out that if there’s no majority for Mrs May’s agreement with the EU, it’s a dead letter. 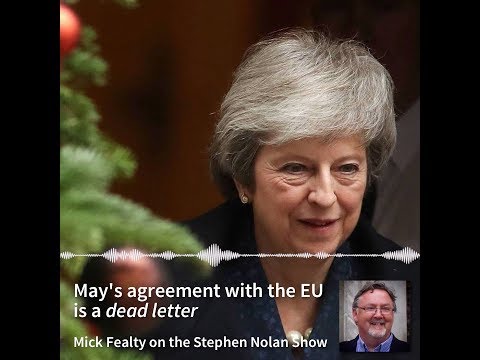 This is the end of the internal revolution, but unless she can get Labour MPs to put their hands up in large numbers, it’s hard to see it how it progresses with 117 Tories signalling they just don’t want it.

Her haste to trigger article 50, the policing of any move to draw in other parties in Westminster to develop a consensus by the ideologues on the Tory right means that what’s come out of the sausage factory is something few parliamentarians actually want.

As Newton Emerson pointed out that last week the EU and the Republic have not sufficiently distinguished between a weak British position and a weak British government.

God knows what happens next.

UPDATE: Dodds on Newsnight saying that nothing has changed with the confidence and supply agreement, and says they will support the PM and will NOT back a confidence motion against Mrs May.

However, Nicholas Soames’ suggestion on the same programme that some letter of comfort attached to the current agreement will cut any ice with the DUP is somewhat naive. No party has a longer experience of the weakness of annexes and letters than the DUP.