So Michel Barnier calls for de-dramatisation and what happens? The drama gets worse. Newton Emerson describes it thus:

He’s not wrong. In a country with no written (ie, codified within a single reference document) Constitution, the struggle to translate an opaque plebiscitary outcome into a prosecutable plan of action it can live with afterwards, was bound to raise temperatures (and tempers).

With regard to the present hysteria, two things need stating out loud. One, even a hard Brexit won’t breach the Belfast Agreement (indeed, the harder the Brexit the more important that Agreement may become). Two, the Agreement is NOT sacrosanct.

If you doubt the latter, check out the legislation that brought forward the St Andrews Agreement (and which has, in very large part, made NI all but ungovernable to suit both the DUP and SF) and the bringing in of an official opposition (again agreed to by the DUP and SF).

The problem with such rhetorical distractions is that no one’s examining the detailed implications of the kind of Brexit the DUP is likely to deliver to ordinary people in NI or questioning its long-term effects on relations within and between these islands.

The DUP’s input has been to screw up Ireland’s backstop arrangements, which would have forced some kind of regulatory border down the Irish Sea. It was part of a green jersey game evidently led by Taoiseach and Taniste to make ground on their arch-rivals Fianna Fail.

In London, it got the DUP some Brownie points, since even the most realistic Eurosceptics understood that the Irish government would have no incentive to gamble away a one-way backstop in any following upstream negotiations.

Varadkar already understood this opening gambit was bust when he announced that the backstop was bulletproof. Sinn Fein must have known it too, but they largely seem to have fallen silent since last December’s deal on any open criticism of the government’s position.

His second line in the Brexit Lotto is to hope that the Parliamentary arithmetic in Westminster is so tight that Mrs May is forced to do the sort of minimal, “regulatory alignment” deal giving the UK has little scope for diverging from EU norms n the short term.

Despite the apparent good news of yesterday, that’s far from a given. Michelle Barnier has become something of a hate figure for Brexiteers, but he is in a tricky position with the EU 27 countries behind him and the UK in front of him.

The real problem is the wave of millenarian delusions it has given rise to has blown almost every reasonable thought about how to continue a functional history on the far side of a deal. Getting access to the Single Market involves a trade-off on the kinds of deals available elsewhere.

It is not clear who came up with the backstop design. But the idea a significant part of a single sovereign state stays in the Customs Union whilst the rest comes out is novel: reflected in the fact that when it came in front of the Commons there was no division.

But it has set up a binary premise in which one side or the other is going to have to be seen to step down. Which brings me to last night’s conversation on The View last night in which Mike Nesbitt noted that none of the issues thrown up by Brexit are as binary as advertised: 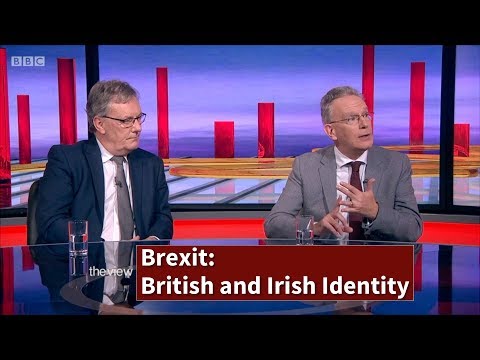 History will not stop with Brexit. Indeed, that is likely to be when a whole new set of thinking has to begin, on both sides of the water (and the border)…