House of Fraser, with the announcement last week that it is to close 31 Stores across the UK, is just the latest in a long line of retailers which have either gone to the wall, or are scaling back their high street retail operations through store closures.

Business rates are effectively a trading tax which businesses have to pay to have a high street presence, which in the era of online retail, puts bricks and sticks retailers at a tremendous disadvantage.

All the major retail trade bodies believe the current system is outdated and requires radical reform.

Northern Ireland now has the highest shop vacancy rates in the UK. A recent survey by Springboard has identified a 14.2% vacancy rate in Northern Ireland, 5% higher than the UK average. This figure that would be close to 25% vacancy if the charity shops (which pay no rates) were excluded from the calculations.

Looking at the situation objectively, we need to understand

So how did we get here?

If you ask the average NI shopper in the street why the high street is suffering, common responses will include online shopping, parking, a poor retail offering.

If you ask the average retailer why their business is suffering, most would agree with the points made by their customers. But there is one issue above all others which NI consumers would not be aware of, but which is consistently referred to by all retailers – the ridiculously high levels of business rates here in Northern Ireland.

In order to understand the financial burden business rates represent to local retailers, this “trading tax” needs to be looked at against the rest of the UK, so that the rates burden on the weakest part of the UK economy can be compared to other regions.

The main point is that poundage rates in Northern Ireland are 16% higher than Scotland and 23% higher than England and Wales.

The main problem that can be seen when business rates are compared across the regions is the rates burden is in Northern Ireland for small retailers. A retailer occupying a property with an NAV of £12,000 per annum will pay on average £5k per annum in Northern Ireland and Nil in Scotland, England and Wales.

As well as having to deal with the highest level of rates poundage in the UK, most Northern Ireland retailers feel that their NAVs have been set unfairly high, and in many cases has been set much higher than the rents being paid by the retailer. In Newry we have also seen many examples where small businesses have had their NAV set at levels slightly above the small business rates relief threshold, meaning that this relief is being denied to many local retailers.

Northern Ireland no longer has 50% rates relief for new businesses who reoccupy premises which have been long-term vacant and expect new start-up businesses with little or no trading history, to pay full business rates from the very first day of trading following the withdrawal of this relief in 2017.

In summary, we have reached a point where through the policies of Stormont, supported by all Northern Ireland’s District Councils who set the rate poundage’s, have sent all the towns and city centres into terminal decline. This is evidenced across a range of metrics from Shop Vacancy Statistics, the profligacy of charity shops, low pay, zero hours contracts, retail insolvencies, and retail start-ups.

What is currently being done to address the problem?

In true Northern Ireland style, rather than undertake an extensive consultation and engagement with consumers, retailers and other relevant stakeholder groups to understand the problems faced by the high street, our politicians, civil servants and local councils (who are not retailers) have tried to second guess the issues, and have embarked upon a major streetscape regeneration schemes across our towns and cities.

Whilst this may have improved the aesthetics of many of our towns and cities, the structural issues that needed to be addressed have instead been ignored. The streetscape improvement solution can only be compared to deciding to repaint your front door while the house is on fire.

One a more positive note, several towns and cities have established Business Improvement Districts (BIDs) and other community groups which are doing their best under admittedly difficult circumstances to improve the foot fall and business environment.

Here in Newry, as well as the good work undertaken by the local Chamber of Commerce the community group Newry2020 has led a campaign to re-envision the Long term derelict,Albert Basin site as a state of the art city park, and have organised annual music and arts festivals to help revitalise the city centre. Similarly, Newry BID have been in discussions with local stakeholders about the potential to develop a shared positive vision for the city. But to be sustainable over the longer term, these grassroots efforts need to be embraced and supported by central and local government policies. 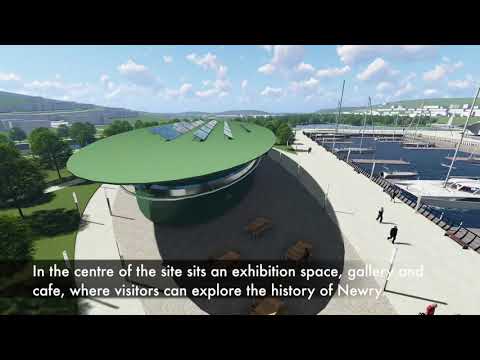 What are the long-term strategies to regenerate the high street?

Many of you who have read this far must be asking themselves: if things are this bad, what’s the point in trying to save the high street?

Despite the concerns we have raised, we do believe the high street has a future. However, it will require radical surgery to fix it.

In conclusion, Northern the poorest of the UK regions has the highest business rates burden in the UK relative to the size of our economy. In addition, we also have the least amount of available rates relief in the whole of the UK which puts the start-up and small business sector at a massive disadvantage as banks are now holding back finance to start-up businesses once they model the effect high business rates has cash flow and financial profitability of a business.

Land and Property Services (LPS) are in the process of undertaking its five year rates revaluation, Reval2020 and following extensive lobbying from the likes of Retail NI, and the Northern Ireland Consortium and one would hope that a degree of common sense and fairness will return to the system, however many ratepayers, myself included felt very let down by the last revaluation which in the main left ratepayers nursing higher valuations that the rent they pay. Today, many occupiers now pay more in rates than they do in rent and most have had little success going through the appeals process which is stacked against the general public from the moment the appeal is raised.

What we now need are policies from not only from Central Government but following the extension of their powers, Local Councils to address the issues identified above. With Stormont in permafrost and a Secretary of State who continues to avoid making decisions, this responsibility now rests with the local Councils and the question is whether they are able to step up to the plate and use these new powers to help regenerate our towns and cities or just continue to kick the can down the road as is currently the case.

In addition, the current process of appealing to Commissioner of Valuation at LPS needs to be updated and an Independent Ombudsman established as is the case with other Government agencies as transparency and fairness needs to be brought back into the appeals process.

I like others, do however believe the towns and cities of Northern Ireland can have a bright future if politicians and policy-makers can get to grips with the issues faced, and deliver a range of solutions that will encourage retailers and residents to locate on the high street and bring our towns and city centres back to life.

The success of our towns and cities should be viewed in terms of the rising tide principle – if we are can deliver on this vision, all of society will benefit.

Edited to add new section about the rates review.

Patrick Murdock is a dual qualified Chartered Surveyor and qualified Tax Advisor original from and currently in based Newry. An independent free thinking liberal at heart, prior to establishing his own specialist consultancy, Patrick has built a twenty year career working for a number of global advisory firms and continues to work across markets in the construction, property and final services industries and has considerable experience and practical knowledge of working day today in the UK, Northern Ireland and ROI markets.

He is also Cofounder and operator – The Hub, Newry.