This is going to create ructions, not simply within Fianna Fail, but within the wider polity… 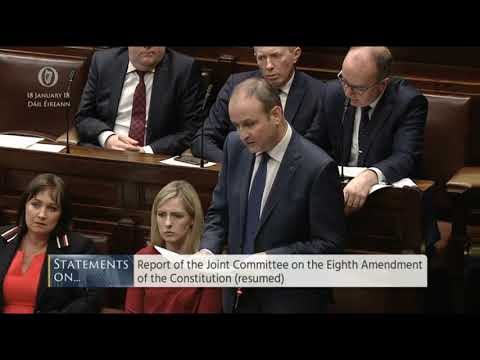 Cue a huge Twitter storm, and a lot of upset not least within Fianna Fail. But his lead point is the damage the Eighth Amendment has done to women. A nod there to the Halappanavar case, which I would guess represented a shift in the tide in of public opinion.

Then there’s been the case of the Kerry babies, and a reminder of the overweening influence of the Catholic Church in what still feel to some of us ‘oldies’ as very recent modern times.

It will force his own team to choose and go public at a time when Martin’s nearest rivals are still mulling it over. And Sinn Fein has already been forced to overturn an official position arrived at as recently as their November Ard Fheis.

Because it has caused real harm to the quality of care available to pregnant women at critical moments; because it has not and cannot change the reality that abortion is a present and permanent part of Irish life, because it seeks to force women to carry a pregnancy to term when they have been the victim of a rape or incest or when they have received the diagnosis of a fatal foetal abnormality, because it requires that pregnant women and doctors are faced with criminal sanctions.

And because it prevents us from responding in a humane way in order to help women in the most traumatic situations.

Because of these reasons and following a long period of reflection and assessment of evidence before the Oireachtas Committee, I believe that we should remove the Eighth amendment from Bunreacht na hÉireann and I will vote accordingly.