Peter Robinson’s influence on unionist politics can be clearly seen in government papers that were released on Friday under the 20 Year Rule. Inevitably the bundles of papers, sometimes several inches thick in files now available to view in the Public Records Office, are read with today’s political situation looming over their purely historical significance.

DUP deputy leader Peter Robinson sometimes met NIO officials alone, without his party leader. He helped choreograph responses to a James Molyneaux speech by encouraging a low-key response from the UK government to avoid the confrontation that the UUP leader desired.

The East Belfast MP gave a copy of his 2 May 1990 constituency speech to an official in the NIO who shared it with his political affairs colleagues along with some analysis of its contents. You can read the correspondence in the CENT/3/221A file [selective scans].

Robinson addressed “the democratic deficit” in Northern Ireland, comparing the “sickly simulation of local government” with the “powers of councils elsewhere in the United Kingdom”. He decried “the present instrument of destruction [that is] the Anglo Irish Agreement” and asked “for how long will this endure”, articulating “a sense of impotence” that had evolved within parts of unionism who now showed “justified impatience”. His speech is peppered with Biblical references:

“Yes, there is a way forward. The unionist ‘constitutional imperative’ must be to depart from this political Sodom and never look back lest we become a monument of infamy and derision …

“I content that, as far as the governance of Ulster is concerned, devolution is the way forward. Ulstermen and Ulsterwomen should take the decisions that effect [sic] their lives”

“Why am I a convinced devolutionist? Firstly, because I have seen the way Ulster is governed via Westminster rule … I recognise the low rank accorded to the Province by those who order the business of the House of Commons and by those who decide government priorities and I have seen the empty benches when Northern Ireland issues are debated. Secondly, even if their heart was in it the system is remote and unresponsive. And thirdly, because no other system, that safeguards the union, can be achieved.

“Yet for most of you here tonight, the impact of devolution will tell most in the accessibility and accountability it will bring to the political process. You will elect the decision takers. If they don’t do the job well, you will be able to replace them.”

The three page speech finishes with a set of repeated cries of “I seek an Ulster …”:

“I seek an Ulster where democratic principles apply and where the ballot box enjoys the respect and approval of all.

“I seek an Ulster in which every man and woman can expect and receive equality and justice – these rights are the entitlement of all who abide by the law. All should be equal under the law and equally subject to it.

“I seek an Ulster where its leaders address the ordinary every-day needs of their people – for, a health service founded on meeting the medical requirements of its patients, and social services aimed at providing care, rather than meeting the financial cuts of its administrators; for providing decent low-cost housing for the homeless and a system of education to educate and not to brain-wash our children.

“I seek an Ulster that preserves its natural beauty and improves and brightens its environment;

“Some will say ‘Dream on Peter’. But it is from the dreams and goals of men and women that inspiration comes … I pray that he who reigns over all will endow us with the dedication to strive for these goals and apportion to us the courage to contend for these principles. May it please Almighty God that he might preserve each of us to see the day of their coming?” 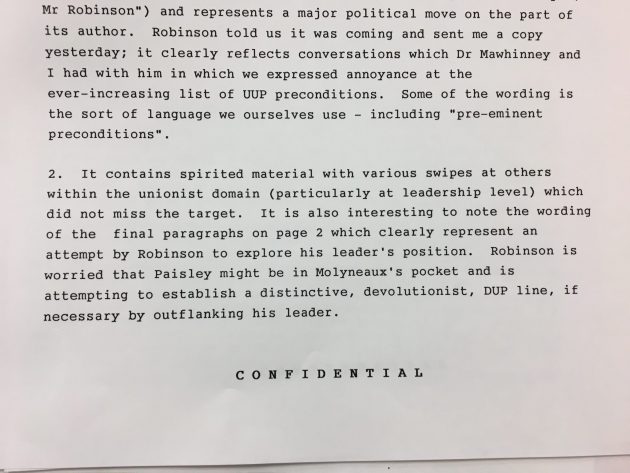 NIO officials reckoned that “Robinson is worried that Paisley might be in Molyneaux’s pocket and is attempting to establish a distinctive, devolutionist, DUP line, if necessary outflanking his leader”.

While the confidence and supply arrangement at Westminster gives today’s DUP a little more influence over how UK government affairs [Ed – and nearly the offer of a cabinet seat] there are aspects of this vision that are definitely still ‘in deficit’ at present with local leaders no longer addressing “the ordinary every-day needs of their people”.