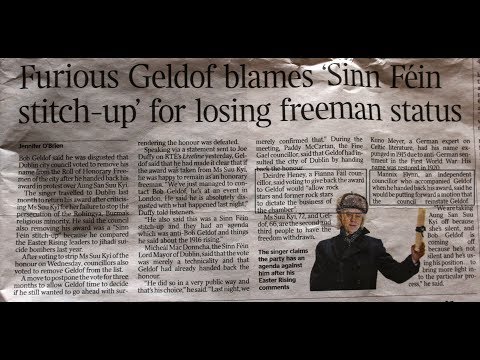 Fascinating conversation in council last week on whether Bob Geldof should lose his Freedom the City status, because, well, he handed to them, so they calculated that they have no choice but to accept it and strike him from the record.

Formally, you can see the Lord Mayor and the CEO are being procedurally correct. But Cllr Paul McAuliffe points out outside the public conversation, there is no record of the conversation between Geldof and council officials.

From Bob’s point of view, the Journal notes:

“I’m here to hand back the Freedom of the City of Dublin, which I don’t want to do because it means a lot me. I don’t want to be grandstanding either but it’s a small personal gesture.”

The most cogent direct defence of Geldof came from Labour’s Cllr Andrew Montague:

We look at Bob Geldof and what he is done, and he manages to get up the nose of a lot of people. He can be arrogant, he can be a big mouth, he can be a self-publicist. But it’s for those reasons that he’s been very successful at making a significant and important change. The kind of change that most people here in this room would get behind.

Not everybody remembers, not everybody was even born when Live Aid happened but Band Aid and Live Aid were very important cultural moments in our history. At the time what they did was just raise money and it was a drop in the ocean for what was needed to change the world.

But what they also did was generate a lot of momentum and a lot of people took started listening to people like Bob Geldof who then campaigned for things like debt relief for impoverished countries and the Millennium Development Goals and it was those two things that really had profound change in the world.

There’s a particularly passionate contribution from Independent councillor Mannix Flynn, who seconded the motion to remove Geldof’s name, said he would be putting in a motion that the council reinstate Geldof.

The reason we are taking Aung San Suu Kyi off because she’s silent and Bob Geldof is coming off because he’s not silent. And he’s using his position in terms of the scroll of the Freedom of the City to bring more light into the particular process.

Sinn Fein had by far the most speakers in defence of their own motion, but Cllr Ray McHugh’s was echoed in most of them:

I really think it is an insult, not only to the Lord Mayor’s office but also to the City and to the citizens of Dublin that a musician who was coming to the end of his career and got a lifeline through a famine in Africa so as he could qualify for one of the greatest honours that Dublin can bestow on anybody.

It’s a rare occasion that the actions of this Chamber will reverberate on the world stage but tomorrow has that potential based on the actions that we took 20 minutes ago.

If the reports of this Chamber are confirmed or make international press tomorrow for the symbolic act that we took I want those reports to read that we removed the freedom city from Aung San Suu Kyi.

What we’re about to do now is borderline embarrassing. I don’t know much about Bob Geldof but he does not get to get the headlines tomorrow. Tomorrow’s headlines should be that this chamber removes this freedom of the city.

Of 45 City councillors voted 33 in favour of officially rescinding the honour it granted to Geldof in 2005 for his humanitarian work, with seven councillors opposed and five abstaining.

The vote on an amendment from Paul McAuliffe to defer the motion until Geldof’s position was cleared was defeated by 23 to 20 with two abstentions. The whole thing is worth watching. As is the earlier debate on Aung San Suu Kyi.