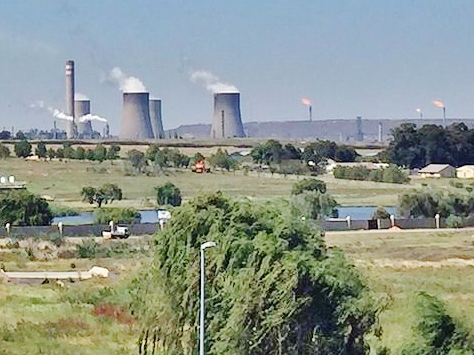 The borough of Metsimaholo is never going to make it into South African Tourism’s snazzy YouTube ads. It is anchored by the town of Sasolburg, named after the energy company that built it in the 1950s as a staff town for a synthetic oil plant complex. The complex still dominates the area to the extent that its cooling towers are the logo of the municipality.

It’s a workaday place of around 150,000 people, at the very southern fringe of the Johannesburg-Pretoria-Vereeniging megaplex, around 80 km from downtown Jo’burg. Unlike most of that vast sprawl, it is not in the urbanised Gauteng Province, Africa’s richest region, but just over the border into the usually rural flatlands of the Free State.

Nonetheless it starred in a brief walk-on cameo scene in South Africa’s ongoing political drama when the entire council was re-elected this Wednesday just 15 months into a five year term, after failing to set a budget in July. It was politically paralysed after a near dead heat between the ANC and opposition parties in 2016 left a small group of inexperienced and politically brittle independents holding the balance of power.

Municipal crises are hardly unusual in South Africa, but what made this week’s election different was that, for the first time the ever, the South African Communist Party fielded candidates in competition with the ANC. In 1990, as South Africa began its transition towards democracy, the SACP formed a Tripartite Alliance with the ANC and the Congress of South African Trade Unions (COSATU) that has dominated political power across the country since the first democratic elections in 1994. SACP candidates have been elected on ANC tickets and hold office in ANC administrations up to and including the most senior cabinet posts.

The Alliance has been fraying for several years, to a large extent because of the corruption of President Jacob Zuma and his links with the shady Gupta family business empire. Zuma is term limited and will cease to be ANC leader at the Party Congress to be held later this month, with the leadership contest between his ex-wife and ex-African Union Chairperson, Nkosazana Dlamini-Zuma, and liberation-era Chief Negotiator and sometime business magnate, Cyril Ramaphosa.

If Ramaphosa fails to win the leadership election, COSATU is openly flirting with the idea walking out of the Alliance. The SACP, for its part, decided in July to keep its options open on fighting elections in its own right. This was its first test and its returns were modest, with 8.7% of the vote and just 3 of the 42 seats up for grabs. But if the SACP were to poll 8-9% of the vote across Gauteng and other major urban areas in the 2019 national and provincial elections, the face of South African politics could be changed.

For the ANC to lose control of culturally and economically dominant Gauteng at the provincial level would be big moment in the history of South Africa, doubly so when one considers how the ANC-led liberation movement came to maturity on its streets. The ANC won 53.6% of the vote in elections to the Gauteng Provincial legislature in 2014, and just 46.1% across the province in last year’s local elections, losing control of both Johannesburg and Pretoria-centred Tshwane. (The Western Cape province, centred on Cape Town, has been in opposition hands for most of the time since 1994.)

At a national level, the ANC starts from a higher base of 62.2% in 2014, and 54.5% in last year’s local elections. Political transition in Gauteng has been generally understood as a real possibility for some years now, but until recently few saw any risk of the ANC losing its national overall majority in 2019. That perception is starting to change, and if the SACP definitively ploughs its own furrow, the 2019 elections will be impossible to call.

The ANC now risks a sort of death by a thousand cuts. In Metsimaholo, it polled 63% in the 2011 council elections, before the Zuma-Gupta driven electoral malaise became acute. On Wednesday, that fell to just below 35%. In its heartland township neighbourhoods in the area, the decline has been even more acute, from a whopping 82% in 2011 to 45% yesterday.

No dominant challenger has emerged – Metsimaholo’s townships gave the EFF 25%, the Communists 12% and the DA 8% this week. But in a sense, there doesn’t need to be. South Africa uses the purest of list PR systems for provincial and national elections, with no minimum vote threshold to qualify for seats. Parties polling as little as 1 vote in 600 can and do win seats in parliament.

Working-class Black voters, sceptical of the DA’s ability to deliver real change and wary of the EFF’s love of paramilitary displays and incendiary rhetoric, now have another option if they are dissatisfied with the long-ruling party: one with impeccable struggle credentials and a decent record in government over the past 23 years.

To add to the ANC’s problems, it also seems to be slipping in Zuma’s home province of KwaZulu-Natal, its one political bright spot in recent years. Analyst Dawie Scholtz calculates that in 25 council by-elections held in rural parts of KwaZulu-Natal so far in 2017, there has been an 11% swing from the ANC to the Zulu-traditionalist Inkatha Freedom Party. Inkatha had, until recently, been in perpetual decline and was dismissed by ANC stalwarts and neutral observers alike as a sort of legacy party for elderly voters in the most isolated parts of the Zulu countryside. Given South Africa’s electoral system, even a small Inkatha recovery would represent yet another irreplaceable drain on the ANC’s core vote.

Much depends on the outcome of the ANC Congress, to be held in Kimberley from 16-20 December: not just of the leadership election itself, but just how fractious relationships between different factions are while it takes place; ANC factional disputes have already boiled over into outright murder at times this year, especially in KwaZulu-Natal.

With the fall of Robert Mugabe in Zimbabwe and the Bostwana Democratic Party looking increasingly at risk of losing power for the first time since independence in 1966, the winds of political change seem to be gathering across the southern African sub-continent, even in the most unromantic parts of South Africa’s industrial heartland.