“Peace is not merely the absence of war but the presence of justice, of law, of order —in short, of government.”

Thought I’d start this piece with a useful boss-quote, for a couple of small but intriguing items. First is the news that Sinn Fein’s former Finance Minister not only got his sums wrong on a claim in his election poster, but is going all Boris Johnson and pretending that there’s nothing wrong.

In huge lettering on its first page the flyer states: “Since 2005 Sinn Fein’s vote in South Belfast has doubled. The SDLP’s has halved.”

However, a glance at electoral statistics shows that between the 2005 general election and the last general election two years ago Sinn Fein’s vote has indeed soared – up from 2,882 to 5,402.

One lesson they are clearly drawing from last year’s Brexit campaign is if you persist with something you clearly know to be untrue and keep pumping it into your social media echo chamber the more likely you are to gain from it.

As Sam points out it’s not the first time Stormont’s latest Finance Minister has had trouble with figures:

Two years ago, the candidate took the highly unusual step of posting a video online while polling was continuing in which he confidently stated: “You will have heard by now that I am topping the poll in South Belfast.” When the votes were counted, the Sinn Fein candidate came fourth.

Interestingly Mairtin’s Vine account, which had 882 posts and 611 followers seems now to be private, so the incriminating 2015 message is no longer there for all to see. 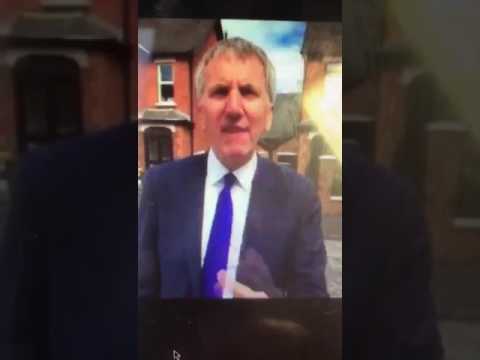 The modus operandi appears to be to throw as much mud at the wall and hope that some of it sticks. Which is likely what this other set this strange outburst from the SF candidate for Fermanagh and South Tyrone is all about:

There is no legal arrangement for this (US citizens abroad, for instance, must continue paying tax to earn their right to vote), but it might just blind voters to the fact that SF MPs are either effective retirees from or surplus to the requirements on the front line of politics.

As Jean-Claude Juncker once famously said, “when it becomes serious, you have to lie…” [Ssssh, just don’t tell the voters the actual truth and we’ll all be okay… -Ed] That seems to be the general idea. Still a long way from “Peace” then?