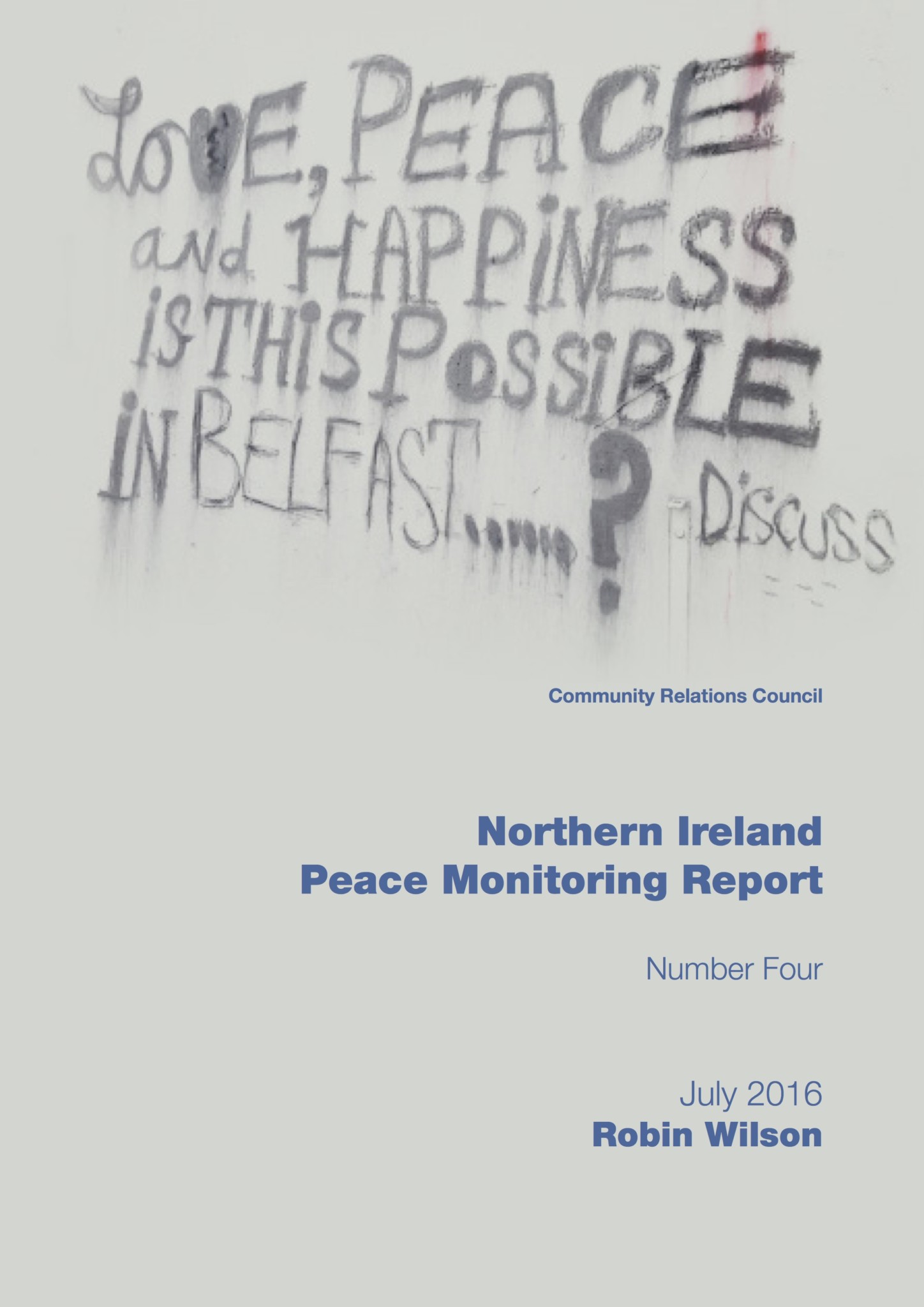 This afternoon, Robin Wilson spoke at the launch of the fourth Northern Ireland Peace Monitoring Report (PDF). With a gap after the publication of the third report, the appointment of a new author, the Assembly election and referendum period, this new report covers a period of two years.

The familiar four dimensions continue to shape the structure of the report: the sense of safety; equality; cohesion and sharing; and political progress. PMR groupies will recognise the report format and the quantity of charts and graphs, though they will also lament the absence of the infographics which previously brought some of the key statistics to life.

You can listen back to Robin Wilson’s introduction to the report along with Community Relations Council chair Peter Osborne’s reflections and the view of UU academic Gillian Robinson.

In this post I’ll look at the ten key points that introduce the report and postpone examining the 160 pages that follow for another post (or two).

Looking to the future, the shift from all-party government to government and opposition does open space for the executive to be made accountable. One of the least anticipated developments of the period under review [2014-2016] was the transformation of governance arrangements at Stormont, in the wake of the 2016 assembly election, from all-in government to a consensual coalition, agreeing an outcomes-focused Programme for Government, scrutinised by an assembly opposition on behalf of the wider public … Whether the opposition would coalesce and whether this would give the electorate a sense that elections could be the occasion for genuine political alternation however remained to be seen.

The detail underneath these points highlights the low economic productivity of the Northern Ireland workforce, graphs a rise in loyalist paramilitary assaults (while levels of republican assaults remains level), the extraordinary per capita expense of the PSNI and its performance, the changing nature of the prison population, the “quiet crisis” of rising indebtedness, suicide rates, and the staggering demographic inequalities of life-expectancy.

While debunking the myth that racism is the new sectarianism, the report notes that “there is evidence of some hardening of attitudes”. One of the most disturbing tables in the entire report (above) shows how people responses to questions in the NI Life and Times Survey. While attitudes relaxed between 2007 and 2009, “there has been a sharp reversal, with now most respondents rejecting eastern Europeans and, particularly, individuals of Muslim origin as accrued family members”.

Free from the shackles of central government, the Peace Monitoring Report can undertake a spot of checking the attire of local emperors without having to be relentlessly positive. This is particularly valuable when the report assesses how Northern Ireland’s education system and workforce skills compare internationally.

The report is peppered with personal asides and anecdotes that reflect the worldview and experiences that the writer has brought to this authored report (and survived the advisory group’s thorough review). It succeeds in diluting what could otherwise be read as a stuffy and overly verbose publication.

As an exercise to measure “how far this place has gone along a path towards peace and normality”, as Robin phrased it at the launch, it succeeds and will continue to be a must-read report.