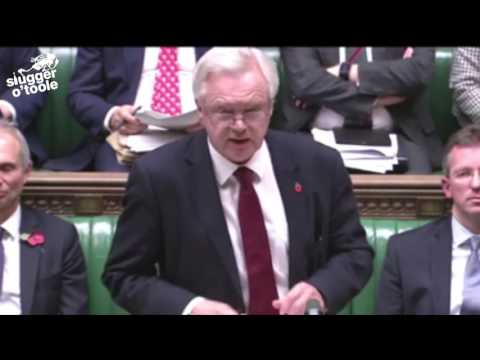 David Davis’ complete statement on the High Court judgement, pointing out that the government’s belief that the referendum (advisory) given that the initial decision was only to trigger the Article and not to leave the EU per se, it was entitled to use prerogative.

To that end, he plans to appeal the judgement, which he says should be dealt with in December, leaving the government (he hopes) time to keep to its original timetable. He mentions Northern Ireland here and says the government will robustly defend against any appeal.

Towards the end he reminds the house “that Article 50 is the beginning of the process, not the end”. That may be so, but triggering Article 50 is also an irrevocable act with clear material consequences to it not least the potential and permanent loss of citizen’s rights.

And in such circumstances Westminster’s Parliamentarians may yet have cause to thank the courts in lieu of the weakest and most divided opposition the UK has seen in many generations.

Notably, he had little to say about the opprobrium heaped upon the High Court for most of last week. For those still struggling (and there’s at least one Irish Parliamentarian who should take careful note), this was the danger articulated last year by Lord Neuberger…

Lord Neuberger said this in a speech last yearhttps://t.co/4kBrMUYqyM pic.twitter.com/G1fcPhjEoz