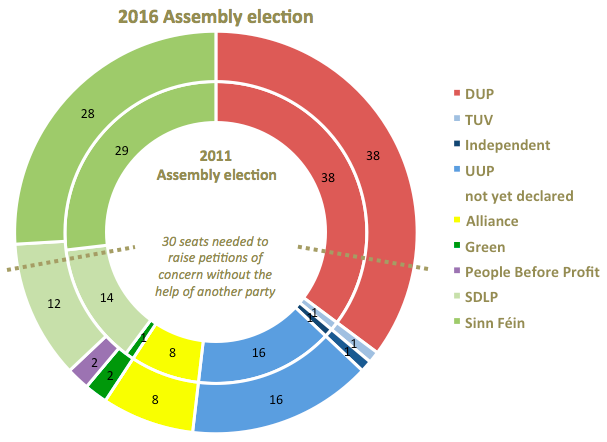 With the count complete in Upper Bann, all 108 MLAs have been elected. The 2016 seat totals are remarkably consistent with 2011. [Graphic updated to move People Before Profit to be adjacent to Green Party and other MLAs designating as ‘other’.] Yet behind the figures, internal party dynamics and voter sentiment have been at play and a number of contests have returned new MLAs rather than a sitting and contesting MLA.

Arlene Foster’s DUP will now lack the McCrea and McIlveen surnames in her Assembly squad [Ed – Ahem, Michelle hasn’t gone away you know!], with Ian and David being replaced respectively by Keith Buchanan in Mid Ulster and Philip Logan in North Antrim. Colin McGrath polled ahead of Sean Rogers for the SDLP in South Down, while Sinn Féin’s Cathal Ó hOisín is replaced with Caoimhe Archibald in East Londonderry and Steve Aiken steps into the shoes of the UUP’s Adrian Cochrane-Watson in South Antrim. Some of these swaps suggest that parties need to rethink their succession planning and co-option strategies.

When the D’Hondt handle is cranked to allow parties to select ministries, the order will be as follows.

(If the SDLP’s Dolores Kelly had held onto her seat in Upper Bann at the expense of Sinn Féin’s John O’Dowd, the SDLP would have had a choice as opposed to inheriting the final remaining ministry.)

The UUP will have to wait in turn to see if the Education ministry is still free after the DUP and Sinn Féin make the first three choices.

The new departments are:

Will the order be Finance -> Economy -> Health -> Education? Share your thoughts in the comments below. Updated: On Twitter, John Ó Néill raised the issue of how D’Hondt would run if the UUP and/or SDLP chose not to nominate. I think the order is as follows, but the sharp-eyed readers of Slugger should feel free to check my homework!