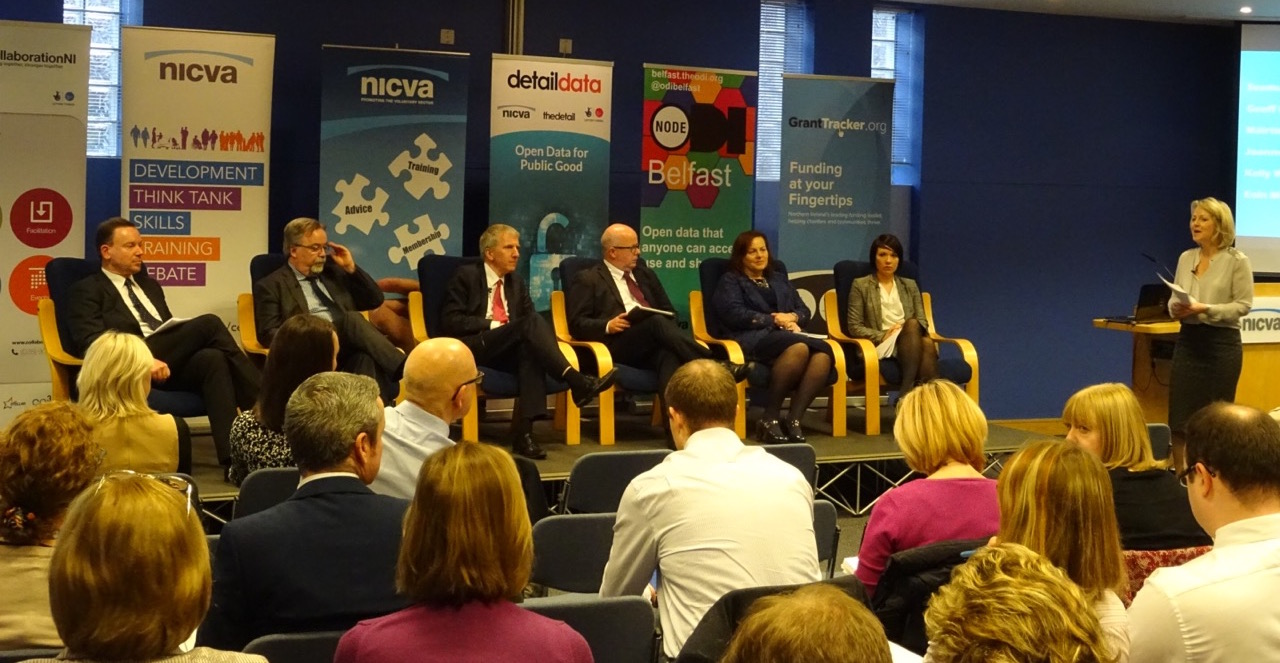 Under the current budgetary and economic conditions, he argued that we cannot survive by continuing to think about doing more with less, but instead need to think about how to do things differently.

Kelly Wilson replaced her DFP minister Arlene Foster (who was called away to an NI Executive meeting). She’s the director of Strategic Policy and Reform Division) and said that departments were critically aware of the demands on public services as well as public expectations.

She highlighted the Northern Ireland Innovation Strategy (DETI) and noted that innovation doesn’t have to be radical or on a large scale. Effective change can be small. But government needs:

The keynote speaker was Geoff Mulgan, chief executive of Nesta. He began by remembering that today is the 200th anniversary of the birth of Ada Lovelace, the ‘mother of computing’. While he segmented his talk into business, public sector and civil society, Mulgan admitted that discussion in each of these fields is no longer separate: the same language, methods and ideas are common across sectors.

Mulgan referred to Nesta’s summer report on the 2030 NHS. Rather than just throwing increasing amounts of money at the health service to “protect” it, a different, less hospital-based vision of the NHS was required. Planning for 2030 would need to take into account genomics, peer to peer mutual support, behavioural economics, along with new digital technologies self care and care for each other.

He suggested that opening up public sector data was one way to boost innovation and allow feed in ideas from external analysis. The role of the Alliance For Useful Evidence was highlighted and the possibility of a What Works Centre for NI.

One casestudy looked at public parks. With belts tightened and cuts being made, what’s the alternative to public parks slowly sliding into disrepair? Could parks be run with half their current budget? Can money be generated from services or events within park boundaries?

Can more be done to fit people to jobs? And fundamentally, can we prepare young people for the jobs that will survive the net wave of automation, robotics and computerisation. (Will Uber require drivers once driverless cars are available?) The jobs that are predicted to have longevity are those requiring creativity, social intelligence, and dexterity (using your hands to make things).

Mulgan finished by reminding the north Belfast audience that mindsets are as important as programmes when it comes to fostering innovation: optimism, openness to experience; and paranoia. Nothing motivates like a bit of fear. Harness that energy and that’s where the innovation will come from.

During the Q&A with the speakers and other guest panellists, DETI’s Eoin McFadden argued that we don’t have a choice about innovating: the disruptive influence of technology on markets cannot be stopped. He reminded the audience that long distance truck driving is one of the most common jobs in many US states … but California is trialling autonomous trucks.

Geoff Mulgan suggested that building real life work with businesses into the school curriculum helps children realise why learning is important. He cautioned against relying on economic growth alone to solve every problem. Innovation must go hand in hand with other changes. (Finland are experimenting with Basic Income.)

One perceptive question ask about the ethics of “experimenting” with services and service users who may be sick and potentially vulnerable. The need for – and existing practice of – ethically checking policy initiatives to prevent unintentional damage was agreed.

The Q&A concluded with a swerve towards Minecraft and Nesta’s Christmas List which includes PrintCraft’s ability to 3D print designs created in the game. An innovation for your stocking ahead of further public sector changes next year!