When the Belfast Festival lost support from the local Russell Group university earlier this year, the organisers could have walked away with an enormous chip on their shoulders. Instead indefatigable festival director Richard Wakely has embraced the opportunity to make a fresh start and produced a programme of events for 2015 that is even larger and more alluring than last year.

Renamed the Ulster Bank Belfast International Arts Festival, over 24 days between 9 October and 1 November, 134 events from 23 countries will take place in 30 venues across the city. Around 30,000 places are available for free events during the festival, with an average ticket price of £12 for the paid performances.

Belfast has a thriving culture and arts scene, not to mention countless festivals. By now emphasising ‘international’ in the title it’s a bit more obvious what makes Belfast Festival distinctive from its sister organisations.

“Audiences here in Northern Ireland get to see work that they wouldn’t otherwise get to see elsewhere … so you don’t have to travel to Edinburgh, London, Paris, New York or Dublin to see the best of international arts. You can see it on your doorstep here in Belfast.”

With a week to go until the opening of the Belfast Festival, what events might tickle the curiosity of Slugger readers? [full programme PDF]

Lyndee Prickitt reacted to the gang-rape of a 23-year-old physiotherapy student on a bus in New Delhi in December 2012 with outrage. She went on to create the multimedia narrative We Are Angry to blend together the written word, video recordings, vox pops and photos to “capture the real swell of anger” in the country and to give voice to the traditionally unheard victim in patriarchal India. The innovative 360 degree digital storyteller will be in conversation with Fionola Meredith in the Brian Friel Theatre on Friday 23 October. Tickets £6–£8. The film India’s Daughter is being screened in the QFT on Tuesday 20 October.

Amnesty International’s annual festival lecture brings Gulwali Passarlay to the stage of the Crescent Arts Centre on Thursday 29 October. Aged twelve he fled Afghanistan and the conflict that claimed his Taliban father’s life. Smuggled into Iran, he eventually entered the UK in the back of a refrigerated lorry from Calais after a twelve-month odyssey across Europe that included prison, hunger and nearly drowning. Now twenty one Gulwali wants to positively change attitudes towards refugees … and one day run for President of Afghanistan. Tickets £4–£6.

Originally from Derry, Darran Anderson’s book Imaginary Cities is “a work of creative nonfiction” and roams through cities made up by artists, writers, architects and lunatics to point out that we already inhabit real-world equivalents. Darran Anderson is in conversation with Mark Hackett in PLACE, Tuesday 27 October at 6pm. Tickets £3–£5.

Turandot’s most hummed tune is Nessun Dorma, made famous at the Italia 90 World Cup by Luciano Pavarotti and the BBC’s coverage. In an enormous co-production with the State Theatre of Nuremberg and Théâtre du Capitole de Toulouse, Northern Ireland Opera are bringing Calixto Bieito’s English-language version of Puccini’s opera to the stage of the Grand Opera House to close the festival between Friday 30 October and Sunday 1 November. Staged in a slave labour factory under totalitarian rule, it questions modern day consumerism and the capitalism that feeds our demand for shiny technology at cheap prices. A previous Soapbox post delved into some of the issues that this shocking production hopes to raise. Tickets £18–£46.

Who owns the news? Whose news is it? How do our own personal stories fit with today’s media priorities? Sister of Another Mama are artists in residence at the Belfast Telegraph. They’ll work with 11-14 year olds and the paper’s journalists to produce a supplement to accompany the daily paper one day during the festival. You can also drop into PSsquared between noon and 8pm on Saturday 24 October to explore some of the more performative aspects of their practise.

And if you want all your senses stimulated at once …

The Kitchen takes fusion cooking to a new multi-sensory level, mashing together the sights, sounds, smells and even tastes of South Indian cuisine in a theatrical treat. With a huge set, a team of drummers, and a couple cooking in tandem with big enough pots to feed a crowd, this wordless drama serves up the traditional Indian dessert of payasam in the Grand Opera House, Wednesday 21 – Friday 22 October. Tickets £12–£24. 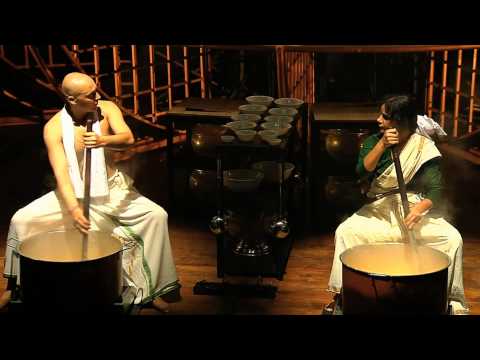 There’s a wider preview over on Alan in Belfast …