Or, like me, cloud cover obscured the solar eclipse of 20 March 2015.  Here’s probably the best view of this morning’s event, from ESA’s Sun-watching Proba-2 mini-satellite.  [Image credit: ESA/ROB] 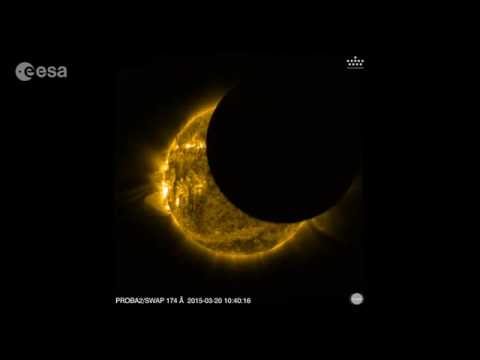 As Europe enjoyed a partial solar eclipse on the morning of Friday 20 March 2015, ESA’s Sun-watching Proba-2 minisatellite had a ringside seat from space. Orbiting Earth once approximately every 100 minutes, Proba-2 caught two eclipses over the course of the morning.

Proba-2 used its SWAP imager to capture the Moon passing in front of the Sun. SWAP views the solar disc at extreme ultraviolet wavelengths to capture the turbulent surface of the Sun and its swirling corona.

Adds This is cool. As featured on tonight’s Stargazing Live, and via the Met Office News blog, here is a loop of images of the shadow of this morning’s eclipse passing over the UK and Ireland – as viewed by EUMETSAT’s geostationary imaging satellite, Meteosat-10.