Belfast’s last three Lord Mayors have been praised for transforming the role from apolitical representative to promoter of unity and even reconciliation. Last night at the 4 Corners Festival, the current Lord Mayor, Nichola Mallon (SDLP), and the previous two, Máirtín Ó Muilleoir (Sinn Féin) and Gavin Robinson (DUP), shared stories from their experiences and gave some insights into the importance of the office.

Mallon described the Lord Mayorship as a ‘once in a lifetime opportunity’ to serve as a symbol of reconciliation, even if this draws criticism from some quarters. For her, ‘the problem lies in the person who thinks the act of reconciliation is a sign of weakness.’

The event was originally slated for the Ulster Museum but was moved to Fitzroy Presbyterian at the last minute due to high demand and fears that the museum would not be able to accommodate everyone.

The discussion was chaired by Rev Steve Stockman, minister at Fitzroy and one of the founders of the festival. Musician Chris Wilson played several songs throughout the course of the evening, including one specially commissioned for the festival, ‘Imagine this City without Walls.’ (You can watch his performance below.) 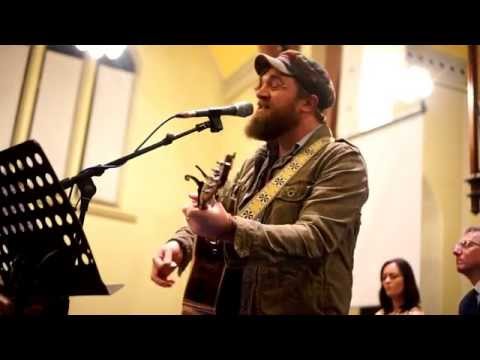 The mood was quite jocular, with all the mayors demonstrating wit and good humour. Stockman deftly moved the conversation along and drew an observation from Robinson that his interview style was ‘Eamonn Mallie-esque.’

There was that sort of optimism in the hall, as it was clear that Stockman was looking for ‘good news’ stories and examples of ‘generosity’ and ‘imagination,’ following the themes of the 4 Corners Festival.

Mallon summed up the mood at one point when she said:

‘I defy anyone to do this job and not be optimistic. … I think compassion is a wonderful value and I have seen it in abundance in my role as Lord Mayor all across the city. I was not as optimistic when I took this job as I am now.’

We learned something of the background of all the mayors. Mallon described growing up in the Ardoyne, where she developed a sense of injustice at what she saw people enduring and a conviction that people ‘deserved a better quality of life.’

Robinson became interested in politics at age 13 when he was visiting an uncle in New York, and a story came on the news about the signing of the Belfast/Good Friday Agreement. Seeing a good news story about his home sparked his interest in politics.

Ó Muilleoir joked that his entry into politics was down to a ‘mid-life crisis’ and said that he accepted the post as Lord Mayor ‘because I was told – that’s the way this great party works. There is a higher power, you know!’

Stockman asked what corners of the city the mayors had and hadn’t known well before taking on the post, which yielded some surprising stories. Robinson revealed that while he came from the east of the city, his first job had been working as a clown in the west, in Divis. Ó Muilleoir described how when he was taking up the post, Robinson took him on a cycling tour of the east so he could become familiar with that part of the city.

After a break in the conversation when Wilson played Foy Vance’s ‘Guiding Light,’ Stockman asked who were the mayors’ personal guiding lights. All mentioned family and God – even Ó Muilleoir, who even though he doesn’t practice a religion proved to be a publicly ‘religious’ Lord Mayor, appointing a team of nine chaplains from different faiths and taking to quoting the bible on Twitter. Ó Muilleoir said:

‘When I became Lord Mayor I hadn’t been to church in 40 years. One of the great revelations of my year was being welcomed by faith communities. … Those faith communities and my nine chaplains were a source of support for me. … The most radical places in this city are where people of faith gather to do good. … The churches need to show us the way forward to build relationships and knock down walls.’

As only the third female Lord Mayor, Mallon said serving in the post had made her more aware of her gender than ever before. She related how young girls she visits in schools and various organisations respond so positively to seeing her in that role, although she was somewhat surprised at the media interest ‘in what I wear’ – something Ó Muilleoir and Robinson did not encounter.

The mayors also reflected on some of the difficulties of the job. Robinson recalled how during his year he faced three significant challenges: 1) the bus lanes ‘disaster’, 2) major flooding, and 3) the flag protests. He said he came under pressure from his own constituency to support the flag protesters, but that this would not have been in line with his role as Lord Mayor for the whole city. He said:

‘I had to set myself against a part of my constituency, which was difficult personally and politically. … And there have been consequences (for me politically). … I only attended one protest – the silent prayer vigil at City Hall. … There we stood together to say that there is something better for our city.’

Mallon revealed that she has at times been criticised for participating in ‘acts of reconciliation,’ and she has no doubt that this will be used against her in the next election. She said:

‘At times when I’ve tried to reach out in acts of reconciliation it has been perceived as weakness on my part. … But I have come to realise that the problem lies in the person who thinks the act of reconciliation is a sign of weakness.’

The evening ended with Stockman asking the mayors for advice for the churches about what they could do to help make Belfast a better place. Ó Muilleoir had already mentioned the possibility that some Syrian refugees would soon be arriving in Belfast, and asked the churches to make them welcome.

Mallon urged Christians to have more confidence in telling their good news, to not worry that it was being boastful, and to ‘affirm politicians when they get it right, and be a critical friend when they get it wrong.’ Robinson encouraged Christians to ‘do all your business outside of the church walls … and show through your actions that there is substance to the gospel.’

The 4 Corners Festival continues through Sunday, with the full programme available here.