Linda Ervine was at Stormont today to hand in a letter calling for “fair treatment and respect for the Irish language.”

This Tuesday 2nd December at 11 am on the steps of Parliament Buildings I will be presenting a letter to representatives of the main parties. The letter calls for fair treatment and respect for the Irish language. It outlines the disappointment and anger caused by divisive and insulting comments about the language and calls for the introduction of an Irish Language Act.

Our current political system lacks integrity and many display a moral cowardice. That is why I have taken this step. I pray that my message will not be distorted and will be received gracefully – Linda Ervine

Accompanying Linda was Alasdair Morrison, who was a member of the Scottish Assembly from 1999-2007 and has been nominated to stand for the Western Isles on behalf of the Labour Party in the coming elections. Mr. Morrison is a Presbyterian and a native Gaelic speaker who believes that the Gaelic Language Act in Scotland has brought many benefits and he strongly supports the work of  both POBAL and Turas.

Clearly we live and work in a different context, but speaking Gaelic in Scotland betrays nothing of your religion, politics or class. The positive work being carried out by Linda Ervine in East Belfast is already bearing fruit and deserves our support. Because in Scotland we have the Gaelic Language Act and in Wales there’s the Welsh Language Act, we’re no less British. A compelling case is being made by Pobal, the advocacy group, for an Irish Language Act in Northern Ireland and this was endorsed in the St Andrew’s Agreement back in 2006. When the legislation is eventually enacted, you will find that the British identity in Northern Ireland will not suffer one iota – in fact it will be enhanced as then Northern Ireland will be on the same level as the other British nations of Scotland and Wales – Alasdair Morrison

You can see and hear more about Linda’s work here: 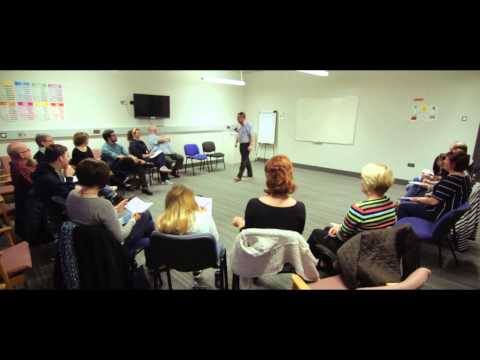 Amongst the many statistics and anecdotes included in Linda’s presentations regarding the Irish language in her native east Belfast and beyond, one of the most striking images is this pennant in support of Glasgow Rangers:

Gregory Campbell will not be amused.