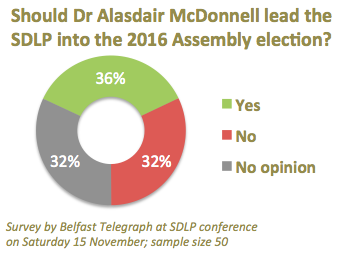 The Belfast Telegraph published the results of their survey of 50 delegates at the SDLP party conference on Saturday. When walking through the exhibition space outside the main hall I declined the opportunity offered to answer the interviewer’s questions. 32% of surveyed delegates did not want Alasdair McDonnell to lead the SDLP into the 2016 Assembly election. And only 36% positively did want him to, leaving 32% undecided (or unwilling to express an opinion). From the mood of delegates at the last two SDLP conferences, and conversations with elected representatives and ordinary members, the low level of support for Alasdair McDonnell’s leadership does not surprise me.

Gerry Moriarty sums up the dilemma well in his Irish Times piece this morning.

There’s a sizeable rump in the SDLP which believes that this time next year the party will have a new leader … The Westminster general election is coming in May and right now nobody in the party is seriously thinking of pulling an Ed Miliband stunt by suggesting he should stand down ahead of that poll. “That would be stupid and counterproductive – the last thing we need going into an election,” said one senior rebel.

So, they’ll wait. They will kick into the election campaign presenting a united front and sometime thereafter they’ll attempt a velvet coup, they say. “We’re hoping for transition rather than expulsion,” said one senior player.

However, apart from some of the leadership speculation taking place on the margins, the conference was all rather flat … In the main conference room there was a sense of demoralisation and almost helplessness. How all the Maíria Cahill publicity has not damaged Sinn Féin was also adding to the dejection.

… overall it’s a muddle. At the conference no one had a clear idea of how fortunes might improve.

Behind the Irish News paywall, columnist Tom Kelly remembered the ‘old’ Alasdair McDonald, the one who “was bursting with energy, a pioneer of cross-community projects with Reg Empey when they were a pariah” before going on to describe him as “a default choice” of leader, “the least offensive option”.

Three years ago in the same Ramada Hotel hall, the SDLP held hustings between the four men standing to replace Margaret Ritchie, announced the results of the election, and witnessed Alasdair McDonnell’s unfortunate moment in the spotlight.

The results of that leadership election should be noted. Eight delegates (in green) wanted anyone but Alasdair McDonnell. The MLA who this weekend looked most like a party leader – Alex Attwood – came last … perhaps with too many enemies made during political battles to ever get him over the line. If there’s an orderly succession, will a party grandee take over temporarily before a younger leader breaks through the grey ceiling?

The problem for the SDLP is that there is no electoral benefit for the party in letting them drive the SDLP agenda. It’s like decorative icing on a Christmas cake, nice to pick off but not the substance of what you are eating.

He also commented on Mairia Cahill’s presence at Saturday’s conference saying that it “may have appealed to the conscience of the party by doing the right thing but it seemed like voyeuristic window dressing”. Tom Kelly finished:

There seems to be an over reliance on the use of tactics as a substitute for strategy and there’s certainly a need for consistency between the policy and actions of the SDLP in office. The Chines military strategist Sin Tzu [sic] said that “tactics without strategy is merely the noise before defeat”.

One policy in which the SDLP are not taking a lead from lobbying organisations like Amnesty International is abortion.

Health spokesperson Fearghal McKinney told the News Letter in October 2014 that the party remained “fundamentally opposed to any extension of the 1967 act to Northern Ireland” (even in the case of fatal foetal abnormality).

But that’s not the view of a majority of the delegates surveyed for the Belfast Telegraph, 54% of whom supported a relaxation of abortion laws “to make it easier to obtain an abortion”.

One final curiosity from the Belfast Telegraph survey. Which leaders in NI did the SDLP delegates trust the most and the least?

David Ford and John McCallister topped the poll with 64% trusting them, with Stephen Agnew on 58%. At the other end of the scale, Peter Robinson and Martin McGuinness were not trusted by 88% of those surveyed. PSNI Chief Constable George Hamilton will probably be pleased with his middle-of-the-road rating.