Dirty politics, abandoned loyalties, live music, paint thrown around and questions about the role of individuals and the state … The plot of An Enemy of the People could be a big screen thriller in the cinema. Instead this is probably the best of a new generation of theatre that will play on the island of Ireland this year, courtesy of the Belfast Festival. It’s also the only time you’ll ever see a paint fight in the Grand Opera House. Get a ticket and don’t miss it.

A spectacular play, with the cast of seven – not to mention a huge dog that gets its own hotel room – delivering gripping performances as they delve into the personal and political powerplays behind a stinking spa town and our putrid society.

A longer version of this review together with an interview with the play’s director Thomas Ostermeier appears in a post on Alan in Belfast. (Grania McFadden also writes about the play and its director in the Belfast Telegraph.)

Spa baths are built in a town to offer health treatments to people feeling under the weather and to attract tourists to the region. All goes well until Dr Thomas Stockmann – who first suggested the baths – discovers that the life-giving water is poisoned by upstream factories and is causing illness. It must be fixed.

The town isn’t as extraordinarily healthy as people think … our baths are a pesthole … a filthy brew seeping into the groundwater [causing] infections, diarrhoea and skin rashes.

A local councillor who runs the baths – his brother – fights back saying that closing the facility for two years while issues are rectified would be disastrous for the economy and burden local residents with the upgrade costs. It must stay open.

The opposition will sensationalise the results [of the water testing] and then we’ll have an inquiry.

Thomas takes his fight to the local newspaper whose staff offer support until they come under pressure from the council. Is disclosure a confidence-reducing scandal? Or is suppressing the truth a bigger scandal? Can they opt to silence and demonise the whistle-blower, covering up the truth “for the common good”?

Politics are always about achieving a balance of interests. I can’t take on all the politicians at once. [Newspaper editor]

A blogger might argue that Thomas should have self-published his analysis online and hoped that his message would go viral. The press today still have enormous power, and a responsibility to wield it wisely. With Wikileaks and Edward Snowden’s revelations, and closer to home staff speaking out in the NI Fire Service and NHS, the establishment’s reaction to whistle-blowers has dominated headlines.

It never hurts to have the majority on your side.

Can the doctor remain true to his convictions or does everyone have a price for which they’d conveniently suppress their conscience and community spirit in favour of personal gain and an easy life?

The Stockmann household is bourgeois and maybe even a tad bohemian, with the thirty-somethings jamming in a band around the kitchen table while a baby tries to get to sleep. Amongst the politics there is space for humour – both funny lines and playful acting. Live music (classic covers like David Bowie’s Changes and Survivor’s Eye of the Tiger) punctuate the first few acts before morphing into beat-boxing and eventually silence.

Lit from the front rather than above, long shadows are cast over the volatile action. The set is a giant blackboard whose chalk annotations are amended and painted over as the plot progresses. Close up personal interactions between the characters are as beautifully directed as the explosive paint-bombing from the stalls that accompanies the final character assassination.

The contaminated water comes from another morass, the morass of our politics … The scandal must come to light.

Two thirds of the way through the production, theatrical boundaries are pushed to one side when a public assembly is organised to give Dr Stockmann a platform to voice his concerns about the state of the town. He ignores the specifics of the spa and instead addresses “bigger things” – the wider ailments that cripple society – including mass personalisation, individualism, rampant depression and political disaffiliation.

The floor is opened up for the audience to have their say as actors step through the fourth wall and encourage dialogue. I can’t imagine Belfast Festival audiences turning down the opportunity to get a few things off their chests about our local economic and political situation.

The original 1882 Henrik Ibsen script has been updated by Florian Borchmeyer for Schaubühne, the leading German repertory company. With a full time ensemble of actors they première ten new plays every year alongside their catalogue of 30 existing productions. At the moment, they’ve six productions running, three of which are touring internationally.

I was fortunate to see the play last week as it passed through London’s Barbican, after which it paint-bombs its way to Moscow, Belfast, Cluj and Lausanne. The play is performed in German, with English surtitles (like subtitles) appearing above the cast. You quickly adapt to catching the dialogue as the lines appear, and filling in the gaps as you become engrossed in the high energy physical interactions.

An Enemy of the People is in the Grand Opera House from 23-25 October as part of the Belfast Festival. Not to be missed. 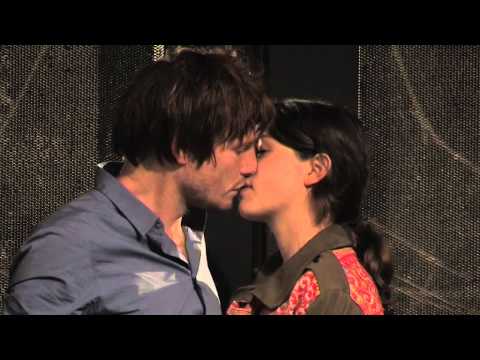 Politicos may also be interested in other events at the Belfast Festival: