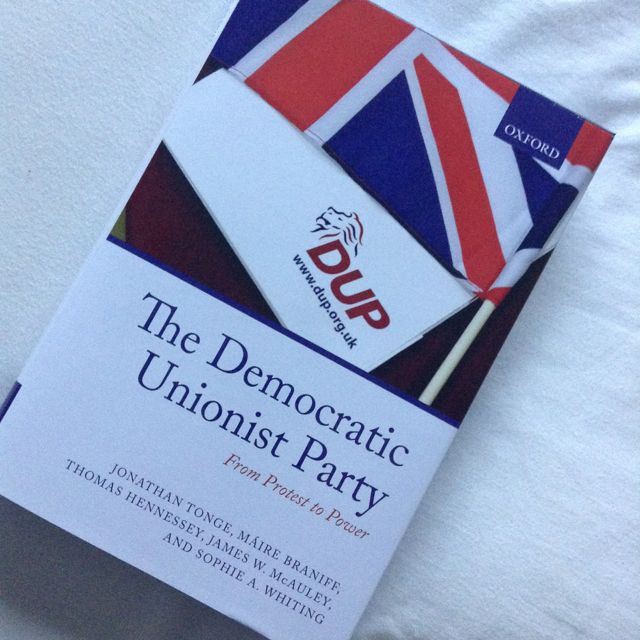 After much trailing in the Belfast Telegraph, five academics launched their book based around two years of research with DUP members and interviews with DUP elected representatives and staff. The Democratic Unionist Party: From Protest to Power looks at the origins of the DUP and its rise to power, the changing discourses that shifted the party from being anti-agreement to in government post St Andrews, as well as slicing and dicing the membership, the role of religion, faith and women in the party.

After a brief introduction to the authors – Jon Tonge (Liverpool), Máire Braniff (UU), Tom Hennessey (Canterbury), Jim McAuley (Huddersfield) and Sophie Whiting (Liverpool) – three speakers were invited to share their reflections on the book and its research.

Forty minutes of Q&A followed the three sets of remarks, with DETI Minister Arlene Foster and First Minister Peter Robinson chipping in with their observations. You can listen to the speeches and Q&A.

I’ve only started reading the book, but my eye was caught by a summary of an “average” DUP member in the Conclusion chapter.

Examined superficially, the portrait of the average DUP member revealed in our membership survey may not startle. He (and it is much more probably a ‘he’) is a middle-aged, married with children, socially conservative, right-wing, church-going Protestant, either sympathetic to, or belonging to, the Orange Order; whose primary concern is the Union; who will never give even a lower preference vote to any non-unionist party and is still begrudging some aspects of the peace process, such as changes to policing. However, the overall picture masks important shifts. The new, post-1998 type of DUP member is rather different from the older version: still Protestant of course and quote likely to be Orange, but unlikely to be Free Presbyterian (only one in seven post-1998 members have been from that church) and less overtly religiously driven, but certainly religiously influenced.

Finding and keeping more members will require the moving average to continue to shift. Yet a broader DUP will be increasingly difficult to keep together as a coherent block. And without the energy of protest, the stalemate of power is unexciting and unrewarding for members.

The authors’ prediction is that the DUP “will need to oscillate between positive visions for the future – strong economy and good education and public services – and cruder ‘Stop Sinn Féin’ messages”.

The Democratic Unionist Party: From Protest to Power is priced at £55 and is available from good bookshops (like No Alibis who were selling it heavily discounted at the launch), Amazon, Oxford University Press and may also be found in some local libraries! Your local MLA or councillor may also have a copy …