I was 11 months old when the Ulster Workers’ Council strike occurred. And given the absence of Irish history on the school history syllabus – at least until the point I gave it up for Geography and spent two years studying Brazil – it’s a part of local affairs that largely passed me by.

There are two conferences on the subject this week. The first at Queens on Monday. 40 Years On: The Strike Which Brought Down Sunningdale brought together recollections from a strike organiser, civil servants, nationalists as well as artists and members of the public (referred to as ‘civilians’ in the programme!).

In the calm before the vote counting and analysis of results, you can listen back to all of Monday’s sessions.

Glenn Barr spoke for an hour setting out a timeline of the build up to the strike, the organisational challenges, political involvement (including the story about Ian Paisley sitting in his chair) and repercussions. Church leadership was described as “abysmal” in the lead up to the industrial stoppage. He argued that the strike itself had failed to bring down Sunningdale. Andy Tyrie wasn’t well enough to attend but Glenn’s overview set a foundation for much of the rest of the day. The mix of trade union officials, paramilitaries and politicians is hard to comprehend. Equally hard to comprehend Glenn Barr’s motivations at the time of the strike and his view on the kind of political change required today. He suggested that 40 years later politics was still about the donkey carrying the largest Union Jack and the goat with the biggest tricolour.

Sir Kenneth Bloomfield and Dr Maurice Hayes brought an inside view of the civil service and government reaction to the strike. A selection of nationalist/republican views were shared by Austin Currie, Tommy McKearney and Harry Donaghy. Austin recalled describing Ian Paisley (in 1967) as “a bigoted hangover from the 17th century”. He also argued that if the army had acted decisively during the first days of the strike it could have been snuffed out. [Ed – parallels with flag protests?] Towards the end of the session Austin and Tommy became quite heated over the role of the SDLP in the Sunningdale government.

Playwright Stewart Parker wrote Pentecost about the strike. [Ed – watch out for Pentecost at the Lyric Theatre later this year.] Actors Adrian Dunbar and Barbara Adair read snippets from the script and there was a general debunking of the myth that Protestants are under-represented in the theatre (both in terms of writing plays and watching them). While people were seeing theatre and being moved by the stories they saw, Adrian asked why there’s wasn’t more of a groundswell change of attitude in society?

The final session brought together what the conference programme described as ‘civilians’! Henry Sinnerton was a teacher during the strike and discussed the impact on him, the pupils and the community around the school. (Henry wrote the excellent biography of David Ervine.) Jackie Redpath, a community activist around the Shankill, talked about the social situation around the strike, with mills closing and housing redevelopment. He noted that whereas in 1974 parents had kept their children away from schools at times of heightened tension – except for the East Belfast mothers who demanded that if it was good enough for one school to be open, then Braniel should be open too! – today, parents would be lobbying to ensure their children had safe passage to school and uninterrupted education. And Derry-based Nell McCafferty was animated as she recalled family reactions to Wilson’s ‘spongers’ speech and her transition away from an initial support for the strike.

Search twitter for #uwc40 and still you’ll be able to look back at a bit more detail on reaction to the speakers and debate.

Eight hours of conference and the Ulster Workers’ Strike had switched from a vague concept to a complex sequence of dominoes that I sense will take a long time – if ever – to properly understand.

UU’s conference in the Public Records Office on Friday (tomorrow) will have less of a focus on hearing testimony from 40 years ago and will concentrate on academic reflections on the context and legacies of the strike and Sunningdale. David McCann will be there and is likely to blog about what he hears. 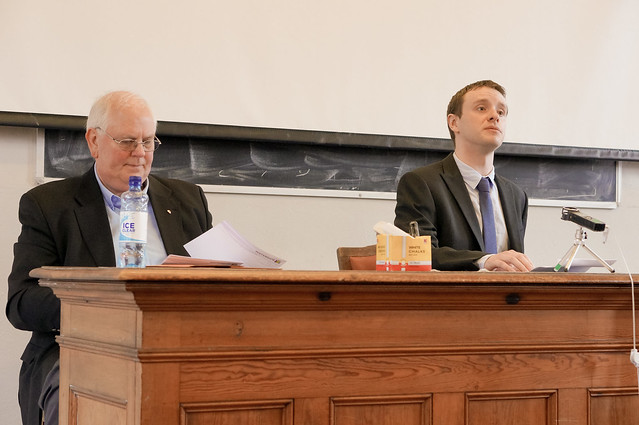 h/t to Brian O’Neill for his photos