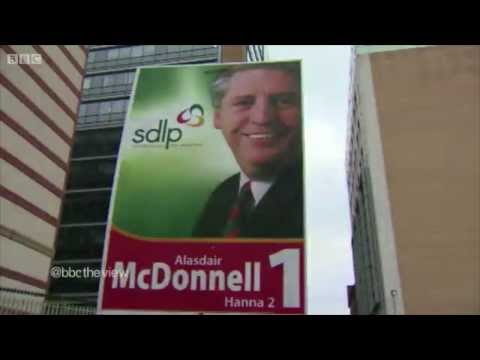 Nice work from Stephen Walker to get his hands on a confidential report based on focus groups across Northern Ireland. The leaker, no doubt, will be keeping his/her head down low (there’s a pun there if you dig not too deeply).

It’s hardly the best way to communicate tough home truths to: one, do it in the public domain first; or two have a journalist do it through access to a leaked confidential document, rather than your own leader.

Clearly not everyone is yet on board given the report’s suggestion the party might consider backing its leader.

That said, there’s surely no future for a party like the SDLP if it doesn’t confront itself with the hard facts of its long downfall. You could even argue that it’s come ten or eleven years too late.

The piece begins by highlighting how big that swing between the two parties was. But the real  party to party movement was early in the period illustrated, and indicates a strong pay off for SF in signing up to the new Stormont institutions.

As David McCann has pointed out, most of what has happened since then has not been a further surge forward for SF, but rather a steady leaching away of voters from the SDLP.

The roster of SF’s advantages are familiar. Strong ownership of community activism puts them closer on the ground to their core working class community. The younger profile of their candidates (though again courtesy of David, five years in aggregate is not that much younger) making them more  easily identifiable with new generations.

The SDLP also did badly on the clear Irish identity compared to Sinn Fein. In the past the party has tended to acquiesce in Sinn Fein’s rather narrow definitions of Irishness rooted sacrifice and martyrdom rather than broadening its own separate appeal in terms of culture, identity and common values.

Yet what really jumped out at me – although it barely got a mention in the rest of the programme –  was the fact that of those interviewed there is no difference on policy discernable between the two nationalist parties.

The report recommended getting more active on health and being clearer on parades and unionist excesses, or lack of leadership.  Both areas where the contact zone is more likely to be with unionism rather than with the party most responsible for its own decline.

Colum Eastwood’s follow up interview [that mustache is just a Movember thing, isn’t it? – Ed] was relatively upbeat and feisty. It may even prove to be little too feisty perhaps, since few of us will forget his now recorded attempt to get Mark Carruthers to take a bet on the SDLP taking a seat.

Of course the field was pretty tight last time so the UUP will make for an interestingly weak back marker, and Martina Anderson the non incumbent SF candidate may also, like the DUP’s Diane Dodds before her, leach votes from de Bruin’s poll topping position last time out.

The pro EU pitch is smart since it might allow them to scrum for votes across old dividing lines by opening up a serious policy gap between pro business/pro social Europeanism and the euroscepticism of all their rivals.

It’s a perfect opportunity to beat up all around them outside the limiting confines of the Assembly. Their real challenge will be quitting the ivory tower of theory politics and start speaking human again.

Learning how to win seats in a competitive market? Now that would be a whole new trick for the SDLP.