So let’s join the dots a little on yesterday’s crash landing of the planning bill. [Focus people, focus – Ed]. This was the bill intended to set up the Enterprise Zones that were so critical to the Downing Street package of cash agreed just before the G8 with David Cameron.

That was on 14th of June this year. By 24th and 25th June, OFMdFM had scrambled together two amendments which radically altered the bill the SDLP Minister for the Environment Alex Attwood had be slowly been putting together. These amendments (if they had proven legally tight) would have handed absolute power to the DUP and Sinn Fein to:

It’s now being publicly argued that only the DUP were backing this deal. But that’s maybe just down to Sinn Fein’s skillful knack of quitting a losing battle long before anyone notices they’re gone. But if you look at who voted in favour these two amendments, the Sinn Fein MLAs are there in force and in lock step with their DUP counterparts:

In fact there are more DUP than Sinn Fein absentees on the following day’s amendment. In stark contrast yesterday Cathal Boylan was accompanied by only a tiny smattering of junior colleagues on the party’s Assembly benches. The big beasts of the party preferred to run for cover: 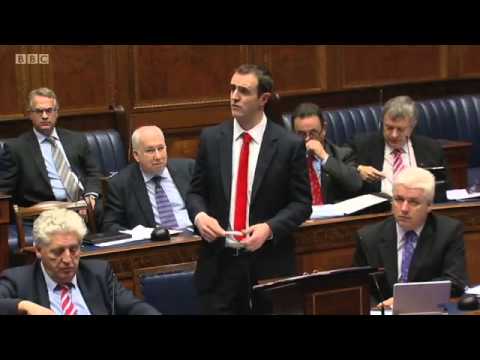 Boylan was the only one from his party to speak in this debate and that was to ask if Minister had sought or received any legal advice from the Attorney General, a question repeatedly asked by DUP MLA’s throughout the session (since it was the only legitimate line they had).

Lord Morrow then stoked the fire a little by suggesting Minister Durkan had broken the Ministerial Code in the same week as the Treacy ruling against his own party’s minister Ed Poots. That put some fire in the Derry minister’s belly:

Mr Durkan: I dispute that I am breaking the ministerial code.  I wonder whether advice was sought from the Attorney General on the amendments before they were tabled.  If not, why not?  If so — [Interruption.]

Mr Speaker: Order.  The Minister must be heard.

Mr Durkan: I do not think so.  I can act only on the legal advice that I have seen.  I am certainly open to hearing other legal advice, and I have sought it from many places, but that is not one.

What legal advice, indeed? Durkan took the precaution of going to one of the five or six most prominent specialist counsels in the UK, in a very complex area of law rather than the necessarily generalist AG. If OFMdFM had sought advice on their last minute amendments, they seem not to have told their own MLAs.

Yes, it was a shameless attempt to sequester powers. And yes, in picking a fight when both the First and deputy First Ministers were away on business, Durkan has sent a strong signal he’s not to be messed with.

More importantly, Durkan has put an end what looks like an opportunist land grab cooked between Sinn Fein and the DUP to control exactly which communities and which developers get the plum economic opportunities. Or, perhaps just as importantly, which don’t.

Now who’s going to tell David Cameron that a critical part of OFMdFM’s commitment to their joint development plan has already gone up in smoke. A development plan which Sinn Fein seemed enthusiastic for in June, but which nevertheless as Micheal Martin was keen to note on Sunday made absolutely no mention of the Republic.

That’ll just be “…the growing dysfunction of institutions ever-more beholden to narrow party interests” then Micheal?