Ian Paisley Jnr has caused a bit of a storm following his appearance on BBC Question Time earlier this week. His views on gay marriage (video clip here) provoked a twitter backlash (featured in yesterday’s Irish News) and led to several on air clashes with fellow contributors and members of the audience. 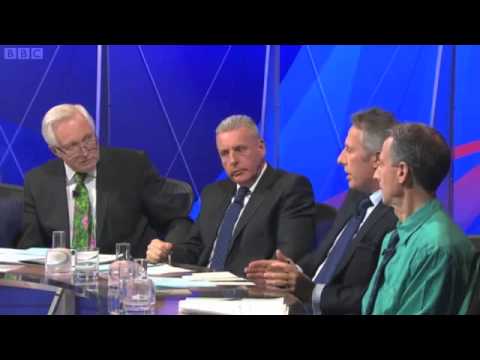 What Paisley Junior had to say was nothing new to people living here, but the British audience of the programme will not have been used to hearing the traditionalist view of marriage delivered in the typically strident Paisley style, which provoked the ire of Maajid Nawaz, who told the DUP MP that he was “yesterday’s news.”

Host David Dimbleby reminded the North Antrim MP and the audience of previous Paisley Junior comments on the matter, when he’d stated “I am pretty repulsed by gay and lesbianism. I think it’s wrong” and when he labeled homosexuality “Immoral, offensive and obnoxious.”

On the programme, Paisley Junior also took flak for stating that he believed “marriage is fundamentally about children. It’s about creating children who in turn create society…. and stability.”

His quip to fellow contributor, Gay Rights activist Peter Tatchell, that he wasn’t being discriminated against because “You can get married tomorrow, you just can’t get married to a man” didn’t do him many favours with panelists and viewers, and his somewhat cocky retort to a member of the audience (“Do I look like a guy under threat, mate?”) apparently got mategate trending on Twitter.

In this interview on a Christian TV station, Paisley Junior is more forthcoming about his religious views and on the primary influences throughout his life. Paisley Junior claimed in the interview that his election victories were a product of “doing the will of God” (helps having an overwhelmingly conservative and traditionally unionist electorate too…)

When asked who really made an impact on his life, he stated that he got most inspiration from other gospel preachers, citing Dr Bob Jones (Jnr) in particular. He claimed Dr. Bob Jones visited his household and “became like a second father…like a real loving uncle to us. He was a great man.”

Bob Jones Jnr was a controversial figure in the US. He inherited the position of President and chancellor of Bob Jones University from his father. The university did not allow black students until 1970 and banned interracial dating until 2000.

He once said of black people:

“I knew, as a boy, some devout and earnest black preachers of the Word of God. There were many. Today I know of very few and am personally acquainted with only two or three black preachers in this country who emphasize the Scripture, stress the necessity of the new birth, and are in any degree biblical in their convictions or their preaching. It is small wonder then that we are seeing a whole new generation of blacks come up in America who have little moral conviction.”

His views on catholicism should sound familiar to Paisley Junior:

“I am inclined to blame every evil on Romanism. Although I dislike everything about the harlot church, the so-called ‘Society of Jesus‘ is the most vicious creation of that religion of darkness and dead bones.”

Bob Jones University’s ban on interracial dating became a key theme for a short period of time during the 2000 US Republican Party Presidential Primary race, when George Bush Jnr was criticized for speaking at the university whilst the ban was in place and due to anti-catholic comments associated with Jones.

This transcript of a Larry King interview with Bob Jones III reveals the moment when the ban was effectively dropped on air following the furore, whilst it also reveals how the university had a Footloose style ban on its students dancing and holding hands on campus.

Bob Jones III’s views on homosexuals are a tad extreme:

“I’m sure this will be greatly misquoted but it would not be a bad idea to bring the swift justice today that was brought in Israel’s day against murder and rape and homosexuality. I guarantee it would solve the problem post-haste if homosexuals were stoned, if murderers were immediately killed as the Bible commands.”

Alas, time marches on and, as you can see from this 2012 report, an LGBT Support Group now exists at Bob Jones University.

But the most pertinent observation and comment on the Question Time programme was left to a member of the audience, who pointed out the hypocrisy of unionist politicians demanding to have their Britishness respected but seeking to have different laws in place on moral issues in Northern Ireland than Britain: “British when it suits them, Ulstermen when it doesn’t.”