Update – Sinn Féin launched the clár (agenda/timetable) for the Belfast Ard Fheis this morning. Agriculture Minister Michelle O’Neill and Belfast Lord Mayor Niall Ó Donnghaile spoke briefly afterwards about the conference coming north, the value of bringing in external guests to speak (including Rev David Latimer – see below), an overview of some of the themes that will be covered in the motions. I also asked whether the issue of Sinn Féin supporting an Irish Presidential candidate would be resolved this weekend … the video’s just a tad overexposed!

The party are expecting around 2,000 attendees – which would make it their largest conference to date.

After a break of 18 months due to a whole series of election, Sinn Féin’s Ard Fheis will escape its normal RDS venue and open on Friday afternoon in Belfast’s Waterfront Hall. 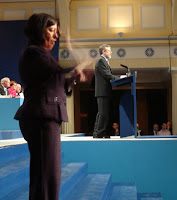 On Saturday evening, while DUP councillors will be waving Union Jacks during Rule Britannia at Proms in the Park in Bangor, the Sinn Féin faithful will be packed into the Waterfront to hear Gerry Adams’ speech at the close of the conference.

There’s normally a surge of delegates and Dublin press in the RDS hall in the half hour leading up to Adams’ speech. It will be interesting how the dynamic changes with the move to Belfast.

September 28 is the last day for nominations for the Irish Presidential election that will be held on October 27. It is still – quite – possible that Sinn Féin will field a candidate (in conjunction with other smaller parties). Update – However due to the RTE reporting restrictions during the election period, it’s likely to remain the elephant in the room and it might not be possible to make an announcement during Gerry Adams’ speech on Saturday night (never mind time to convene the right people to make a decision). Expect some kind of announcement early next week.

The Sunday Times reported on 4 September that some senior party figures including party president Gerry Adams and former Dail leader Caoimhghín Ó Caoláin are “thought not to favour fielding a candidate”. Perhaps they’re thinking about the €750,000 to run an “effective campaign” that they would surely lose. That’s a lot of Sinn Fein ballot tickets (which are being distributed for sale at the moment).

However, Aengus Ó Snodaigh – chief whip in the Dail – is in support and told the paper:

I think holding the presidency is a most important position, although it is not a political position. It would be a very important message to send out across the world, how Ireland has changed since the Good Friday agreement, if Sinn Fein was contesting and put up somebody of calibre.

While reckoning that a candidate should be “somebody who held an elected position now or previously”, Ó Caoláin voiced the perception that neither Martin McGuinness nor Gerry Adams “could afford to leave their leadership positions at the moment”. The Sunday Times reported that Paul Donnelly (expected to be SF’s by-election candidate in Dublin West) was in favour of McGuinness, Michelle Gildernew or Mary Lou McDonald, while Dessie Ellie (Dublin North West TD) tipped “a candidate from Northern Ireland”. But since this is Sinn Féin and not the UUP we’re talking about, if the party leader/president doesn’t want it, it’s unlikely to happen.

PSNI Chief Constable Matt Baggott spoke at a number of party conferences last year. Given Martin McGuinness’ very public criticism of the PSNI arrests in July in relation to the murder of Constable Ronan Kerr, it seems unlikely that Sinn Féin will have issued an invitation.

However, the keynote speaker on Friday night will be Rev David Latimer, minister of First Derry Presbyterian Church. (In a recent post I described his spontaneous visit to the dissident protest camp at Free Derry Corner.) Speaking to the News Letter, he explained:

I see this as an opportunity to build friendships across a religious divide. People are the common denominator. Of course there is no magic wand to wave over us. There is a past there that we will not forget. But as the Queen said on her recent visit to Ireland, ‘We can bow to the past, but we should not be bound by it’.

It was obvious from the last Ard Fheis that Sin Fein’s conference is easily the best organised (of the parties active in the north). Attention to detail, keeping to time, nothing left to chance, and few surprises from the stage. 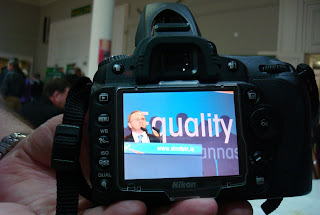 During the periods on Saturday when BBC/RTE broadcast live from the conference, expect to see an orchestrated sequence of pre-scripted short punchy speeches that given from the platform during. Northern politicians will be on stage while RTE are interviewing party bigwigs, and southern ones will appear behind the podium while the heavy hitters move across to the BBC’s studio. Ministers in the NI Executive will all get their turn, along with as diverse (yet youthful) a range of speakers as can be mustered.

Last year’s NI party conferences were dominated by the economy: none was complete without an economic panel (often sitting on sofas). Without serious elections in sight, it will be interesting to see what other themes emerge from the ard fheis, and what resolutions cumainn propose.

Technical problems meant that the party’s planned webcast from the RDS failed. This year, they’re hoping for more success. Fingers crossed for the Waterfront’s wifi! And a hashtag of #ardfheis if you’re following proceedings on Twitter.

For anyone trying to figure out when other party conferences are happening – perhaps helpful for some of the organisers! – here’s my working list of party conference dates (accurate at time of posting):

(Feel free to email me if you’re from any of the smaller parties and want to share your conference dates.)