Back in March, I wrote a post about the proposed ecumenical church boat for Belfast’s Titanic Quarter. With the launch of its business plan last night in Titanic House (the old Harland and Wolff drawing rooms), ‘The Dock’ declared its intention to have its boat afloat by the end of next year.

Given that the churches have so often been considered part of the problem in community relations in Northern Ireland, the Dock’s ecumenical vision seems both audacious and hopeful.

Rev. Chris Bennett, a Church of Ireland minister who is currently tasked with guiding the project and providing pastoral care for those already living and working in the Titanic Quarter, says that he thinks the worst case scenario would be for all of Northern Ireland’s Christian denominations to go into the Titanic Quarter and do their own thing.

For him, the best case scenario is for all the denominations to work together – modelling good relationships and a Christianity that is not about boundaries but about breaking down barriers.

This can be seen in the Dock’s mission statement, in which it locates itself firmly within the discourse of a ‘Shared Future’ for Northern Ireland:

In these days of Shared Future, it is the churches’ challenge to find out what it means to share ministry in this place – to lead by example in breaking down barriers, connecting people, and building community cohesion.

The purpose of ‘The Dock’ is to provide a shared space, achieved through the permanent mooring of a boat within the Titanic Quarter area, on which a ‘Shared Future’ expression of church may be based.

Bennett’s enthusiasm for the project is palpable, as you can see here in his presentation at the launch: 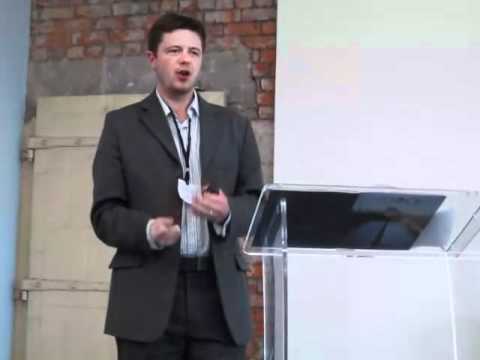 His talk, which lasts for about 30 minutes, ranges from describing what’s proposed for the development of the Titanic Quarter to explaining how the idea for the Dock was developed.

Bennett outlines the three core aspects of the Dock, which are also elaborated in the Dock’s business plan:

Previously, I wrote that although Bennett said that other churches were positive about the initiative, none had yet appointed chaplains for the project. Since then, Bennett has been joined by Rev. Karen Spence, who is now working with him in addition to her duties as minister at Sydenham Methodist. It is hoped that other denominations will soon appoint chaplains.

Bennett and Spence oversee the Dock’s current activities in the Titanic Quarter, including its Sunday afternoon ‘Dock Walk’ (a sort of mobile prayer and worship service), a book discussion group, and meet the neighbours events. Neither have an official office space in the Titanic Quarter. They write blogs on the Dock’s website and communicate via Facebook, functioning almost as a type of cyber-pastor for the young, professional, middle class workers, residents and students who it is expected will increasingly populate the Titanic Quarter.

Quite apart from its quite idealistic ecumenical vision, and its use of social media, the Dock is interesting in that it has set itself up as a limited company. It is not like a typical church congregation, with elders or parish councils and so forth. Rather, it has a Board of Directors and a Board of Management (which include people from Catholic, Church of Ireland, Presbyterian, Methodist, and independent church backgrounds).

Its business plan, which was distributed at the launch, was professionally produced and drew on the expertise of Chris Hollies of Leadership First, ‘an independent Church Development Consultant and Trainer from Belfast.’ Who knew that Belfast has church development consultants?

The business plan is geared towards helping the Dock to raise funds for its yet-to-be purchased boat, which it is estimated will cost around £650,000 by the time it is purchased and adapted for purpose. The production of the business plan was supported by the Church of Ireland’s Priorities Fund.

All this makes the Dock seem to me an intriguing example of the Christian church – explicitly ecumenical, embracing both face-to-face and virtual communication, and efficient and business-like. The vision is that these methods will make for a Christianity that truly enhances the lives of people in the Titanic Quarter.