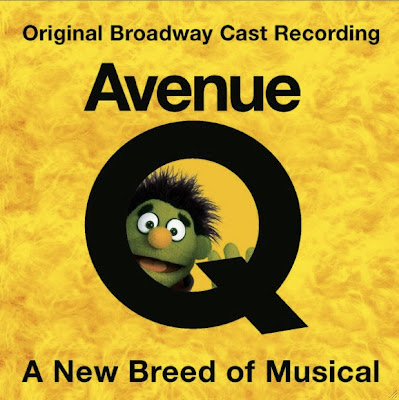 I had seen Avenue Q advertised at the West End a few years ago, but never bothered to figure out if it was worth seeing. Also ignored the posters at the Grand Opera House. But then read a review in last Friday’s Belfast Telegraph, and knew I had to make an effort to see this 2004 Tony Award winning Broadway show, which has been on a last leg UK tour since February.

Described as Sesame Street for grown ups, I expected this musical to be special, written for those of us who hold a nostalgia for the children’s programmes that we grew up with.

Indeed, in the show’s programme interview, Avenue Q music and lyric authors Robert Lopez and Jeff Marx explain the use of puppets in the show:

“It allows us to say things you can’t normally say. With puppets saying these things, there’s innocence about it.”

And while set in New York, the songs are about issues that people growing up everywhere are dealing with. What do you do with your university degree? What if you’re gay? What’s your life purpose? Am I a little bit racist, really? Is it love or an infatuation? What do you do when you hurt someone’s feelings you didn’t mean to? Is it okay to take pleasure at someone else’s misfortunes?

Following official video clip gives a flavour of the approach:

Madame Oui and I loved the show. Listening and watching puppets behave in politically incorrect ways — including puppet sex and the peer pressure influence of the “bad bears” — is hysterical.

Or here’s another perspective on life from Trekkie Monster:

In advance, I knew there was a song about racism. I thought, how is this going to be funny. Well, it is. And while it was being performed, I noticed some wry smiles in the audience — it doesn’t take much imagination to replace the word “racism” with “sectarianism” and admit to ourselves, “We’re all a little bit sectarian.” Or to adapt a line of the song, “Sectarian jokes may be uncouth, but we laugh at them because they’re based on truth.”

Have a listen for yourself:

The show ends on what is actually a serious point, that all that matters in life is now, not obsessing on how perfect our lives have to be in the future, nor pining excessively about wanting to go back to relive our youth (“I Wish I Could Go Back To College”).

And while this Yank is used to watching Americans reflexively jump up to give standing ovations at practically any show, regardless of merit, I’m not used to local audiences here paying the compliment. Until tonight — a genuine standing ovation. It was well deserved.

I leave you with another official video clip of more character perspectives: