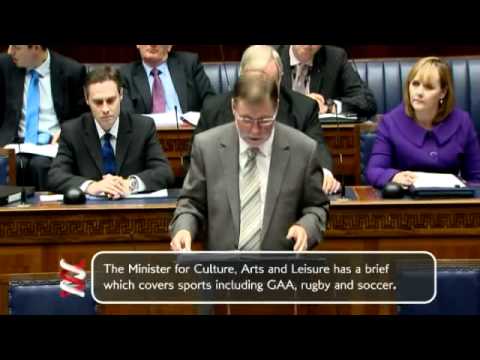 A question in the Assembly from Michelle McIlveen to Nelson McCausland suggested that Unionists are effectively barred from joining the GAA.

While I’m delighted another DUP member has taken the time to read the GAA Official Guide, something many members have never done, I’m surprised they seem surprised to find an Irish cultural and sporting organisation doesn’t have a Unionist ethos.

Both McIlveen and McCausland call for the GAA to change its rules. For those of us with experience of the GAA that may be a valid suggestion, many clubs and a large number of members demonstrate little concern with the Basic Aim of the organisation and seem mainly focused on being production factories for senior football and hurling teams or allowing younger people to participate in these two games. If so many members have little consideration for other sports, cultural, language or national aspirations maybe the GAA would be better off codifying itself as a sporting organisation alone and negating Unionism’s criticism?

Or maybe if they we going to get flack from the likes of McIlveen and McCausland over the Official Guide the organisation could be more proactive overall in actually implementing it?

Miss McIlveen: Although the benefits of sporting events can and should be of immense value to our tourism market, does the Minister share my grave concern that unionists are, by the constitution of the GAA and the rules therein, excluded and prohibited from membership of that sporting organisation? Will the Minister call for those unacceptable rules to be amended by that organisation as a matter of urgency to reflect the shared and better future that we should all be striving for in today’s Northern Ireland?

The Minister of Culture, Arts and Leisure: The Member raises a very important point. There is a general commitment and recognition in society now that a shared and better future is the best way forward in Northern Ireland. In the past, I have commended the professionalism and efficiency of the GAA in how it manages its organisation and activities. I recognise the importance that many in the community attach to the GAA and the value that they place on the sports that it runs. However, I agree with the Member that there is a difficulty, and I have raised it with the GAA and Sport NI in the past; it is not something that I raise today for the first time. As the Member made her point, I noticed that some Members on the other side of the Chamber seemed to be in a state of deep denial. However, rule 1.2 sets out the basic aim of the GAA very clearly:

“The Association is a National Organisation which has as its basic aim the strengthening of the National Identity in a 32 County Ireland through the preservation and promotion of Gaelic Games and pastimes.”

In other words, it places the games as a means to an end. That also needs to be taken in the context of rule 2.1 on membership, which states:

“Membership of the Association shall be granted only by a Club, to persons who subscribe to and undertake to further the aims and objects of the Gaelic Athletic Association, as stated in the Official Guide.”

That quote comes from the current rules, which I think were approved in July. In other words, it states that, to play the games, whether Gaelic football or hurling, and be a member of a club, people have to subscribe to the basic aim, among the other aims, that has the aspiration of a united Ireland. Therefore, people who are from a unionist tradition and do not subscribe to that particular political aspiration find themselves excluded from participation in those games. [Interruption.]
The GAA needs to address that issue if it is to contribute, as it could, to a shared and better future. It would be better if some Members faced up to that with a little bit of honesty and humility rather than engaging in the practice of denial. We must look at how we can address the issue and move forward for the benefit of not just the GAA but all society in Northern Ireland. It is possible to be a Protestant and play Gaelic games. However, according to the rules, it is not possible to be a unionist and play Gaelic games.

Aside: I know this topic will present an almost irresistible temptation for some but please don’t go down the ‘whatabout’ road. Deal with this and if you want a mirror topic on any other organisation/s feel free to write up a draft and email it.

[Moderator’s update: Comments are now closed. This thread has declined below Slugger’s standards.]

272 thoughts on “GAA: the Nation’s desire to live her own life, to govern her own affairs.”