With continuing speculation on a visit by the British Queen to Ireland one person is ahead of the game. Danny Morrison has been talking to the BBC about struggling through the crowds at Glastonbury and being rewarded with a courteous chat from Prince Charles.

When we got up it was Prince Charles… He was the only person out of quarter of a million wearing a shirt and tie.

He asked myself and my brother Ciaran did we actually camp out for three days. We come for about six days. He was very personable.

Maybe Danny’s famous quote could do with some reworking?

Who here really believes we can meet the Royals through Féile an Phobail? But will anyone here object if, with a Glastonbury ticket in this hand and a tent in the other, I take tea with Prince Charles in England?

Update: How happy was Danny to meet Charles? Well, when he (or maybe his brother) passes him during this video the smile is near splitting the face open – man in black t-shirt at 35s in (did the claimed conversation between Danny/Ciaran/Chas happen at some other point because in this clip Charlie merely walks past a very happy old man amongst hippy types. Did someone go back for seconds?)

Though in the wake of the Saville Inquiry you must wonder if the Bloody Sunday Families feel now is the time for an ‘Irish republican’ to be treating a glad-handing with the Colonel-in-chief of the Parachute Regiment as something so enjoyable. 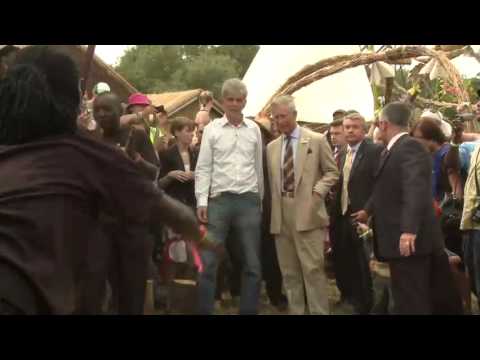 You can hear Danny loving his Royal experience on Radio Ulster here – 2:24:30 on the timer