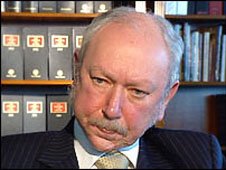 AND so farewell to Sir Alasdair Fraser, the Director of Public Prosecutions for Northern Ireland, who is to retire in September. Conveniently, this will mean that he won’t have to take any tough decisions over prosecutions after the Saville Report is published.

Sir Alasdair has been criticised in the past for failing to account for his decisions and he never defined what the “public interest” was when that became his only way of making them. This satisfied neither unionist, nationalist nor anyone else, certainly didn’t serve the interests of justice and made him look like a government lackey more interested in protecting the State’s mistakes from being exposed and not rocking the Peace Process boat.

Collusion, Stormontgate, the Northern Bank robbery, the failed Omagh bomb case, the Robert McCartney murder. If Thomas Devlin’s parents hadn’t stood their ground, their son’s killers would still be walking the streets. I’m sure you can think of others. He also presided over a justice system that astounded in its slowness. A catalogue of failure that quietly eroded public confidence, so it’s hardly surprising he would want to avoid Bloody Sunday. And all this for a mere £170,000+ per year.

The only interview I can recall Fraser giving was in 2005 entitled ‘The face of justice in Ulster’.

A matter of yards from where the fatal attack on Robert McCartney forced republicans to confront fundamental questions about what constitutes crime, a different kind of transformation in justice is under way.

Hidden from the scene of the McCartney murder by a high wall is the new headquarters of the Prosecution Service. It is where the next key decisions about the case against McCartney’s alleged killer will be taken, and the base for the most significant changes to Northern Ireland’s justice system in a generation.

Five years after it was recommended by the Criminal Justice Review – a product of the Good Friday Agreement – the independent and regionalised Prosecution Service is on its way to being fully established.

Over the next year-and-a-half the service will begin setting up bases in major towns across Northern Ireland, and take over almost every prosecution, including the most minor cases currently prosecuted by police.

And in cases like the McCartney murder, prosecutors will operate alongside the police, shaping a case by advising on legislation and what kind of evidence might be required, instead of waiting for a case file to be presented to them.

The reshaped service is presided over by the Director of Public Prosecutions, Sir Alasdair Fraser. For 16 years Sir Alasdair – son of the manse, educated in Holywood and at Trinity College – has been Northern Ireland’s chief prosecutor.

For most of that time he has been a remote figure at the head of an organisation that was battened down, not only against the dangers it faced through the Troubles, but from general public scrutiny as well.

Now Sir Alasdair and his organisation are entering a new era. For the Service this means a rapid expansion – a caseload jump from about 10,000 cases a year to around 70,000 and a quadrupling of legal staff.

For the ‘Director’ – as his staff refer to him – it also means giving the first interviews about his work, and about dealing with new initiatives and old criticisms.

This week, for example, Sir Alasdair’s office was on the defensive side of a courtroom, confronting one of those criticisms. Belfast man John Boyle, who was wrongly jailed for terrorism charges, brought a High Court action to get the DPP to give detailed reasons why the police who put him away were not prosecuted. The Police Ombudsman had recommended that the officers should be charged with perjury, but prosecutors declined to bring the case to court.

Critics say there is a particularly public interest in explaining decisions involving police. Sir Alasdair won’t comment directly on the Boyle case, but he says the question of explaining the reasons why some cases don’t make it to court is not a problem exclusive to Northern Ireland.

“It’s a problem prosecutors share throughout the common law world,” he says. “The position is that we provide reasons in general terms – that there was insufficient evidence, or that the public interest did not require prosecution.

“We do that not out of any sense of being defensive, but there are issues of rights and concerns of individuals in society. For example, if I said ‘I’m not going to prosecute an individual because I find the following persons not capable of belief’, that would be an inappropriate thing for me to say.

“Those persons, I recognise, would not have due process to protect them.

“Now, if there is a request for more detailed reasons, then we look at the case on an individual basis and we measure how far we can go in assisting the person who is making that request by providing greater detail. That is rather different from saying ‘the Director doesn’t give reasons’.”

He says his office’s policy on giving decisions is “evolving”, and could be assisted by legislation.

Another repeated criticism is the length of time it takes some cases to reach court or come to some resolution.

Although Sir Alasdair says the average time to complete cases is falling – against an increased workload – high profile cases routinely take long periods to complete. Currently the Stormont spy case and the extradition of chef Larry Zaitschek (wanted for questioning about the Castlereagh police burglary) have taken more than two years.

“It’s not a problem which a single agency has responsibility for. It crosses across the system as whole,” Sir Alasdair says.

“I think it is important that prosecutors are given sufficient time to take informed decisions which are sustainable. The system of justice is rather like an orchid. If there were a series of cases that went badly wrong , the damage would be immense.

“It’s very hard to say how long cases should take. A simple case should be reported quickly; a more complex case will take a greater amount of time.

“There isn’t perfection in any walk of life. And there are occasions, clearly, where cases take too long.”