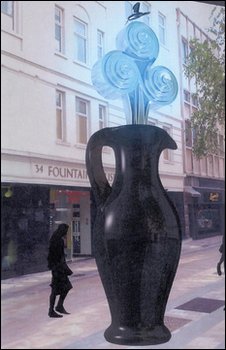 Moochin noted the start of the campaign against the proposed “Magic Jug” sculpture in Belfast’s Fountain Street .  Now there’s an open letter to the Department for Social Development, signed by a number of artists, architects and others, setting out their concerns under four headings: Procurement, Location, The Wider Plan and Sustainability.

“Yes, I think the Magic Jug is rubbish – a silly, frivolous piece of public art,” says campaign organiser Daniel Jewesbury. “But my own aesthetic response is by the by. The real problem is the commissioning process. Why were no artists involved in the commissioning of this piece? How was it advertised? What were the criteria? We need more transparency in how public money is spent. We don’t want to be just given public art and told why it’s good for us.”

Jewesbury is concerned that government agencies with no remit for the arts, such as the North’s Roads Service and Department of the Environment, are taking a lead in the commissioning of public art. “The Magic Jug is part of the Belfast ‘Streets Ahead’ regeneration project – so you’ve got a piece of public art that basically comes out of a road re-surfacing scheme.” The protest group is also concerned about the environmental costs of transporting a five-metre chunk of black Shanxi granite from China to Belfast.

At a time when €1.3 million has been cut from the Arts Council of Northern Ireland’s budget, Jewesbury is particularly disturbed that so many public art commissions go to artists from outside the North. “The last thing we want is an artist from London explaining us to ourselves according to some spurious local history agenda.”

But Andrew Irvine, Belfast’s city centre manager, insists that the commissioning process for the Magic Jug was perfectly open and transparent, and that people on the streets are keen on the new addition. “Not only are we doing this dressing exercise and giving ourselves something that looks very attractive, actually it has a physical purpose of connecting areas, encouraging people to move around the retail circuit.”