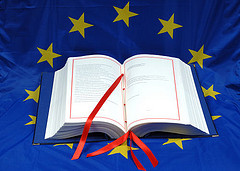 Ben Tonra argues that the concerns around sovereignty and military interventionism (LE4) betray a timidity in Ireland’s sense of its own sovereign power, rather than an assertion of it. He argues that Ireland rather than retiring into the corner, should use the opportunity being opened by Lisbon and press forward and into spaces where its troops can proactively do some good, rather than “howling, free and unfettered, from the shores of the Atlantic”.

Here’s a question – why would anyone want to abandon the Irish veto over all EU foreign, security and defence policy?

It amazes me – honestly – that many of those who are consumed by a passion for Irish sovereignty are the first to throw away that veto. We should fight to the (metaphorical) death to defend our right to veto policy in sport, energy, and civil judicial co-operation (where Lisbon proposes a move to Qualified Majority Voting) but where human rights and life and death choices are to be made, hell, much better to abandon the veto.

Let the rest of Europe do what it wills and we can howl, free and unfettered, from the shores of the Atlantic. By God that will show the imperialists and those that suckle from the historical breast of Redmond!

Of course we know why this is the case- as unpalatable as the reality may be. The simple truth is that the Irish government is not to be trusted and it must be shackled.

Bizarrely, the Irish Government seems to agree with this – how else can you explain why they have given the People’s (sic) Republic of China (and the Russian, French, British and US governments) the final vote over Irish peacekeeping?

Ireland’s neutrality chastity belt, the ‘triple-lock’ is neither: it’s a Chinese Veto.

Mind you, if the Irish government refuses to trust itself to operate Irish foreign policy without the nod from Peking, so too have the ‘opt-outers’. They have evidently lost (or never had) any hope of actually being in government and getting their hands on the tools of foreign policy.

If there was any such hope in their hearts, would they really want to throw away their veto over the Union’s foreign policy? Imagine Joe Higgins as Irish Foreign Minister – what kind of (creative) havoc would he create as the only ‘real’ socialist in the EU Foreign Affairs Council?

Imagine Irish officials lecturing their counterparts in the European Defence Agency on the demands of socialist dialectics and the merits of Trotsky? Picture them berating the EU foreign policy chief Javier Solana for his socialist inadequacies and lack of international solidarity.

Who cares that Solana fought for socialism and democracy in Franco’s dictatorship?

Mind you, I think pacifists have a point. The Union, for a time, was the only major international player without a military capacity. Academics (like me) ‘explained’ this by seeing the Union as some kind of ‘civilian’ power – a new kind of actor which relied entirely on diplomacy and trade tools to exert international influence.

That argument lost a lot of ground (in my head at least) as we witnessed ethnic cleansing in south eastern Europe and genocide in the African Great Lakes. Europe’s bloody past was certainly catching up with it – and laughing as European governments argued over sanctions, diplomacy and toughly worded ‘statements’. Too many died as we dithered.

For good or ill – and I am yet open to persuasion – European governments arrived at the conclusion that ‘civilian power’ wasn’t enough, that the capacity (and the credibility) generated by having military implements in the foreign policy toolbox was desperately necessary.

Thus far we have a track-record of 27 successful EU-peacekeeping missions in Africa, Asia and Europe to review. Just a handful of these have been substantial military missions.

Just a shame that Ireland can’t trust itself to commit to that.