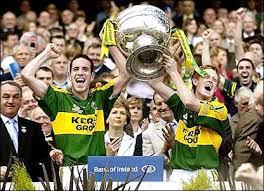 The Ulster Senior Football Championship begins today, with Antrim facing Cavan at Casement Park in the preliminary round fixture. This year’s Ulster Championship promises to be the most open for many’s a seaon, with Derry’s National League triumph elevating them alongside perennial Ulster contenders Armagh and Tyrone as probable favourites- though Monaghan’s early form in the league suggests they’ll be in the reckoning. The BBC will be commencing their most impressive season of coverage to date, showing all but one of the provincial championship games live. For the first time, TV3 will also be broadcasting Championship matches. Their panel should make for interesting viewing, with both Peter Canavan and Joe Kernan confirmed as regular pundits (Kernan will also be working for BBC.) So, Sluggerites, who’s gonna win in Ulster this year, and can they (or anyone else for that matter) stop Kerry?