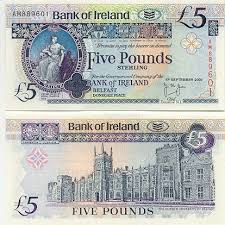 COULD the fallout from the Northern Rock fiasco lead to the demise of Northern Irish banknotes? See below the fold to find out why we might be saying goodbye to our local Sterling notes…Banks in Northern Ireland and Scotland produce their own Sterling notes, but SNP leader Alex Salmond fears they could disappear if Treasury proposals to protect customer from failing financial institutions go ahead.

Apparently, banks that print Scottish notes have to lodge funds with the Bank of England to cover their value, but only for three days of the week – the other four days they can be invested elsewhere, gaining millions of pounds in interest. The Treasury wants to see them lodged there all week instead.

In the wake of the Chancellor’s announcement of reforms, Clydesdale Bank admitted it might stop issuing Scottish banknotes, as they might not “be viable in the future”. I can’t imagine any of the local banks wanting to give up these millions either. Salmond reckons the changes could cost the Scottish and Northern Irish banks which issue their own notes a total of £100 million a year.

This would certainly bring an end to the confused look of English retailers when you hand them a Bank of Ireland (Sterling) banknote, and the annoyance of the customer when his legal tender is inevitably refused.

However, another Scottish Labour MP might disagree – former Northern Ireland minister Des Browne told the House of Commons recently that he has “been in London a great deal over the past 11 years, and in connection with my ministerial responsibilities have periodically had Northern Ireland banknotes in my wallet. No one has ever refused to accept one of them”.

Yer arse, Des! So have I, and I can’t remember the last time one was accepted.