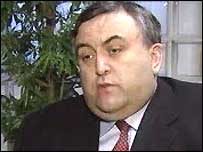 THERE was major embarrassment for the SDLP on Friday after it expressed regret over an election advertisement which led to a former PSNI assistant chief constable suing the party for libel. Alan McQuillan claimed that the advert linked him to collusion during his service with the RUC. The ad also stated that the SDLP had ensured Sir Hugh Orde was appointed chief constable and “not a policeman from the old RUC order”. The SDLP’s legal representative said the party “regretted any unintentional distress and embarrassment” and paid McQuillan’s legal costs – a far cry from the somewhat arrogant approach the party had previously employed before this total climb-down, as predicted by our Chris.