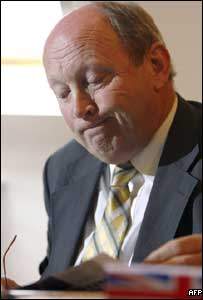 AFTER last night’s 100-strong Moygashel meeting of anti-agreement unionists, DUP bete noir Jim Allister said it was clear that unease and opposition to the DUP and Sinn Fein in government was growing. “The task now is to channel this opposition – it is a work in progress,” he added, a hint that a new party – led by him? – will be the eventual outcome of these discussions. Among those there were loyalist campaigner Willie Frazer and ex-DUP councillors Robin StIrling, William Wilkinson, Walter Millar and Leslie Cubitt. Whatever the sense of betrayal by these hardliners, I doubt if too many of them can really offer much of a challenge to the DUP. My strong suspicion is that DUP accusations of vote-splitting that benefit nationalism, a lack of savvy or ability to achieve objectives and the inate difficulties faced by any new micro-party will see this bunch of backwoodsmen go the way of so many other unionist splits – another deposit on the scrapheap of history. I doubt if the DUP is worried. ADDS: The News Letter has a fuller account, apparently from inside the meeting, although it reckons there were only 80 in attendance. Only 80! Noel McAdam report that there are divisions over whether a “formal party should be established or, at least at this stage, a pressure group to act as a focal point” for opposition to power-sharing. UPDATE: Paisley has responded: “Their so-called political platform has already been rejected by the electorate and they have nothing to offer in terms of prosperity or stability for the province. Indeed, many are more interested in attacking and undermining Unionism than developing and strengthening the Union in the longer term.” Full statement below the fold.
Best comment was from Robin Stirling from Ballymena, who said he had been contacted by disgruntled DUP voters who had promised “to even vote Sinn Fein as a protest” against current DUP-Sinn Fein cooperation. Because obviously that would help their cause…

UPDATE: Paisley picked up on Stirling’s silly remark in his statement entitled ‘Advocating voting for SF is the height of treachery’:

The safeguard for the Union is a strong Democratic Unionist Party. This was achieved at the last election through the defeat of those who were prepared to go as far as to advocate unionists actually voting for Sinn Fein candidates as a protest.

That same folly arose again last night by those who pose as the only saviour of the Union. We heard again from one prominent attendee about those prepared to vote for Sinn Fein. Their so-called political platform has already been rejected by the electorate and they have nothing to offer in terms of prosperity or stability for the Province. Indeed many are more interested in attacking and undermining Unionism than developing and strengthening the Union in the longer term.

The Democratic Unionist Party has succeeded in strengthening the Union by facing down republicans and insisting upon our demands. That strengthening and defence of the Union must be maintained. Advocating voting for the shiners in any election is the height of treachery.

The Union will only be safe in the hands of a strong and united Democratic Unionist team who, as the largest political party in Northern Ireland, are in the driving seat.”

On the split amongst the splitters, McAdam adds: “Some argue that the group should be ready to stand if Prime Minister Gordon Brown calls a snap General Election, or decides to go to the country in spring. But others argue that a committee could act as a focal point to test the strength of opposition to the Executive headed by the DUP and Sinn Fein.”