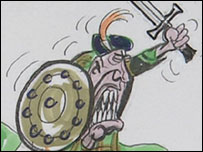 BLAMING the Brits for Northern Ireland’s problems, teaming up with overseas separatists for mutual benefit, trying to pry Westminster’s fingers out of its claim on our taxes – no it’s not Gerry Adams, it’s Ian Paisley. The other day I asked if Paisley was a British Unionist or an Ulster Nationalist. Last night on Hearts & Minds Newtown Emerson answered: Ulster Nationalist. He said: “His unionism derives not from Ulster’s British identity but from its Protestant, or more specifically Presbyterian, character – and that’s where the confusion sets in, because there is a fault line through Ulster’s Protestant character, running right back to its separate English and Scottish origins… Paisley’s very Scottish anti-Britishness shows that the ancient fault line is still there and still clearly capable of shifting – although if Paisley really is, as the English say, “going native”, then it is still only as a native Ulsterman rather than as a native Irishman”.