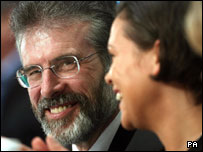 The rocky road to Dublin was travelled by more than 3,000 republican activists today as the date of the Extraordinary Ard Fheis on Policing and Justice finally arrived. In the end, the ease with which the Ard Fheis motion was passed today (between 90%-95% of the delegates voted in favour) was a remarkable endorsement of the Sinn Fein leadership, coming as it did after seven hours of contributions from delegates. During his rousing speech, Martin McGuinness returned to a theme he employed earlier in the week when he remarked that, though January 28th 2007 would be a significant date for Irish republicans, Monday January 29th would be an even more challenging date for the DUP as its time to put up on the issue of Power-sharing would finally arrive. I was amongst those arriving late to the RDS, wrongly expecting the event to run according to the traditionally tardy ‘republican time.’ I missed Gerry Adams’ arrival to the building, instead being informed by Radio Ulster when just outside the capital that a number of party opponents had heckled both Adams and McGuinness.

I did notice Willie Frazer standing on the lawn outside the RDS building hosting the Ard Fheis, and wondered as I passed would Willie be protesting outside a similar DUP meeting in the weeks ahead.

The introductory speeches by leadership figures were impressive, with each obviously conscious of the need to use this occasion to reassure the assembled grassroots activists that the path being charted was correct.

Having attended a number of the public meetings and party briefings on this issue, I didn’t expect to hear anything new in the many speeches, and in this sense I was not surprised. Gerry Kelly charted the history of the policing negotiations since Patten, whilst Gerry Adams sought to contextualise this issue in the development of the republican struggle, reassuring the party faithful. But it was Martin McGuiness’ impassioned speech which caught the mood of the thousands of party activists.

McGuiness launched a full frontal assault on the SDLP and dissident republicans, whilst being careful to distinguish republicans genuinely hurting over this development from the latter group, who he quipped hadn’t managed to even fight the British to a ‘start’ never mind a ‘stalemate.’

But it was in his outlining of the nature of the envisaged republican engagement with the PSNI that he drew sustained applause. He stated that republicans needed to confidently assert their position within DPPs, the Policing Board and the Executive (through OFM/DFM) to critically engage with the PSNI from a position of authority. He continued by claiming that it was up to the latter to gain the trust and confidence of the nationalist and republican community.

This issue was never going to be an easy one for republicans, and the numerous impassioned speeches in favour and opposing the motion illustrated the depth of feeling on this critical matter. But it was clear from very early in the day that the level of opposition to the Ard Comhairle motion was minimal, with Ogra delegates providing the liveliest speeches from a dissenting stance- contributions well received by the audience.

The level of opposition to the motion within the hall might have been minimal, but that probably doesn’t provide an accurate reflection of republican activist sentiment on this matter. As in the past, the party leadership has put considerable effort into bringing the grassroot opinion along during each critical stage of the peace process, and this proved no different. The level of engagement within the party within the past fortnight at all levels undoubtedly calmed many nerves and ‘won round’ many whose initial reactions were less positive.

In the past few weeks, it quickly became clear to most republicans that this was an argument that was being fought between the head and the heart- another theme alluded to by McGuiness in today’s speech. Whilst the media have been quick to pick up on the pronouncements of a small number of dissident/ disaffected figures, the reality was that the overwhelming number of republican activists saw this particular train coming down the track a long time ago and prepared themselves for it. The failure of the dissidents to articulate any plausible alternative to the stance being proposed by Sinn Fein leaders meant that they were always fighting a losing battle when attempting to battle for the minds of republicans.

Another crucial dimension not picked up by many was that republicans were confident that this development would not adversely impact on the party’s electoral fortunes in the impending Assembly election. Sinn Fein activists have maintained a constant presence on the doorsteps of the electorate from last Autumn right through to early January due to the party’s annual electoral registration drive. And through that constant engagement, the message from the nationalist/ republican electorate- as opposed to republican activist base- was a quite resounding endorsement of the Sinn Fein leadership’s proposals.

In the end, probably the most striking message was struck by the party’s Declan Kearney when, during his robustly delivered speech, he noted “dogma doesn’t win struggles.” The theme of the need to ‘grow political strength’ was a constant, underwriting virtually every contribution from those supporting the motion: a reflection of the pragmatic realisation by republicans at a leadership and grassroot level of the task ahead on the path to Irish unity.