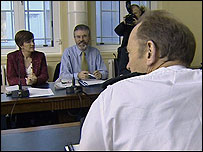 A Sinn Fein delegation headed by Gerry Adams is meeting with Sir Hugh Orde, Chief Constable of the Police Service of Northern Ireland. In interviews over the past weeks Sinn Fein representatives have outlined four preconditions on policing; a timetable for devolution, structure of the Department, no role for MI5 and no inquiries into past activities. Gerry Adams added a further two before the meeting; an end to ‘political policing’ and desisting in the use of plastic bullets:

“We will also raise political policing and the need for clear proof that this has ended or will end, an end to plastic bullets…”

However, it seems the earlier objection to MI5 operating in Ireland and to have a role in civic policing has again been reduced to solely civic policing:

“They can have no role in civic policing;”